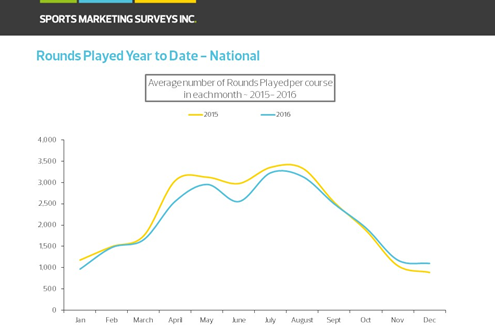 Leading sports research company SPORTS MARKETING SURVEYS INC. has announced a year on year increase in the number of rounds played during the final quarter of 2016.

SMS INC. have confirmed that the average number of rounds of golf played across the England, Wales and Scotland during the final quarter of 2016 is up 10% on the 4th quarter 2015. All regions experienced an increase in rounds played this quarter when compared to the same period in 2015, although this could not prevent the year-end month average from finishing 5% down compared to 2015.

The South and Midlands saw modest growth in October followed by stronger results in November and December and both saw quarterly increases of approximately 7-8%. Scotland and The North also saw good increases in this quarter which has helped to arrest the decline of rounds played experienced in GB throughout the rest of the year.

The weather in the final quarter of 2016 was much better than in 2015. October was sunny and just 38% rainfall, November was unsettled however December was much warmer and dryer than in 2015.

SMS INC.’s Richard Payne, Director – Sports Accounts commented “Better weather in the final quarter has been something of a lifesaver for rounds played in 2016 and prevented four consecutive quarters of decline. Historical data, coupled with information from other projects we have run, highlights the habitual nature of golf consumption and the need to get people out on the course at the start of the season, ideally before The Masters, otherwise external factors like the weather will give casual golfers an excuse to leave their clubs in the garage. Unfortunately, there is little we can do to influence the weather and as such the continued challenge we have as an industry is to eliminate all the other excuses that casual and lapsed golfers like to frequently moan about. This means addressing areas like time and family commitments and turning these into reasons why you SHOULD play golf.”