The robotic ball collector distributed by AMS (Automated Managed Services) is part of their outfield maintenance solution for driving ranges. Tasked with the collection of range balls on the outfield, its purpose is not only to allow for time and cost savings, but its lightweight design minimises the impact on the outfield that can occur with traditional heavy ball collecting equipment. 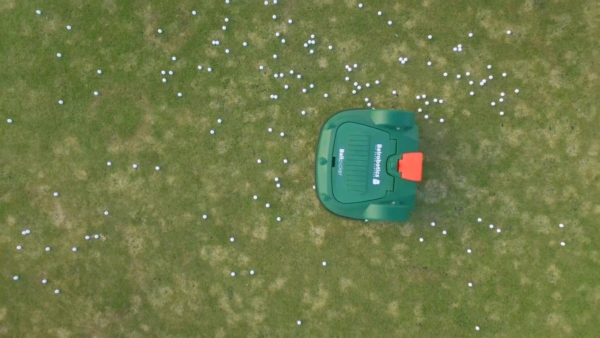 It is usually coupled with the robot mower BigMow, which can cut 2.5 hectares three to five times per week. However, for the winter season the mower is stored away, leaving robot ball collector to work the outfield on its own. Once the balls are collected they are dropped into the AMS ball management system for washing and transportation back to the ball dispenser.

Four driving ranges with the AMS system have given their perspective on how the Ball Picker handled the unpredictable winter weather.

First to give their feedback was Slinfold Golf and Country Club based in Horsham. They have had the automated system for over two winters now and general manager Luke Blacker gives us his insight into its performance:

“We have been able to use the Ball Picker during the winter season, however for the last couple weeks we have sensibly done some handpicking due to the muddy conditions of the outfield caused by the horrendous weather.

I would say in order for any driving range to get the benefits from the robots, you have to know how to manage the outfield. So it’s not just a case of us sending them out on a whim, it’s about taking into consideration things like the weather and outfield conditions.  So if it snows or the outfield is muddy, we look at the ball levels in the dispenser. Then decide if the levels are sufficient enough to wait till its drier to send the robots out or will we need to hand pick. Overall for this winter season I’d say the ratio for us has been 75% to 25% in favour of the robots.

In closing, while managing the outfield is key, the robots are better for the overall health of the outfield and we look forward to seeing its health improve over the coming seasons.”

Second to give their input was Waterfront Golf, located in the heart of South Yorkshire they have had their robots running for two years or so. Richard Jones, Head Green-keeper was very positive in his response stating:

“Ball Picker has been used all through the winter season. Our outfield has been designated into two zones. So the first larger zone is where the ball picker collects, we haven’t needed to hand pick there at all. The second smaller zone is sectioned off from the robots as it is a known wet spot, so we did some hand picking in this area. However this just takes me 30 minutes to clear in the mornings when it is really wet.

All in all the robots are perfect; since they have been installed they have been great. I mean previously we had to hand pick all winter because we couldn’t have heavy machinery out on the outfield. So they definitely save us a lot of time as it used to take 4 people 2 hours to go out and hand pick the balls. The health of the outfield has improved, so yes I can say we are really happy with AMS and their automated golf range system.”

The third site was Horsham Golf and Fitness also based in Horsham, they’ve had the system in for two years. Neil Burke, owner of the golf facility had this to say:

“We have only had to do a small amount of hand picking, overall I’d say the robots have been used 99% of the time during this winter period.

In all honesty if you have the right outfield surface, then the robots work great. We’ve have had a horrendous winter, one the worst I’ve experienced so it has been a difficult one for us. I’m sure if you spoke to any golf manager/operator they would have said they have experienced a tough winter at least once. So while the robots haven’t improved the weather for us, not having heavy equipment going out to collect the balls will definitely improve the overall conditions of the outfield and we have definitely seen an improvement in comparison to previous winters.

Ultimately as I said the robots are great as long as you have the right conditions and if you want to improve the health of your outfield in the long run, they are a worthwhile investment.”

The fourth to share their insight was Chadwell Springs Family Golf Centre based in Hertfordshire.  They have been using the automated system for 10 months plus. Their Head PGA/Golf Manager, Dave Smith response was: “We haven’t needed to do any handpicking at all since installation. Ball Picker is great, we have been using it throughout the winter. We have occasionally gone around the edges to knock the balls back in so the robots can collect them, but that’s it really.

“The robots have been 10/10 what more can I say, we haven’t needed to hand pick during the winter. The outfield is looking great as well, you can’t get any better than that really.”

In conclusion, the automated ball management system has performed very well during the winter period in comparison to traditional ball collecting equipment.  The feedback from AMS customers has been positive; the robot ball collector has brought efficiency to their ball management practices. It has also improved the overall health of the facilities outfield in long the long run.