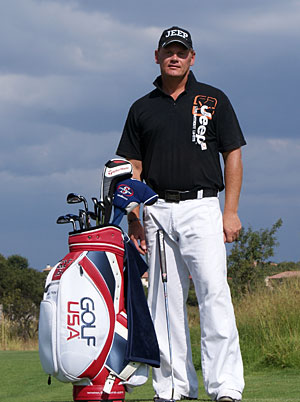 We think more people have walked on the moon than have played the Top 100 Golf Courses of the World. Playing the World’s Top 100 is perhaps golf’s Holy Grail writes Keith Baxter.

It takes patience, money and time… lots of time. For most of us, this remarkable feat is simply a pipedream, for others it’s a lifelong ambition that may never be achieved, but for South Africa’s Heinrich du Preez, it’s a job he plans to get done in just 80 days.

Heinrich Adriaan du Preez is a South African amateur golfer, and the holder of 20 golf related world records, including 9 Guinness World records. This guy is serious. Who’d bet against him achieving the impossible?

In 1873, the French writer, Jules Verne, first published Around the World in Eighty Days. In the same year the first golf club in North America was founded – Royal Montreal Golf Club. Perhaps 100 golf clubs existed throughout the world in 1873 and most of these early clubs were in Scotland. Verne could never have imagined that his fictional character, Phileas Fogg, would have competition from a fanatical, golf crazy South African some 140 years later, which not only included circumnavigating the globe, but also playing 100 rounds of golf on the world’s best golf courses, with most days featuring two rounds of golf.

Meet Heinrich du Preez, South Africa’s Radical Golfer. He’s already played a round of golf on all six continents in just 5 days. He’s also played the most rounds of golf in 7 days (108 rounds) and played South Africa’s Top 100 golf courses in just 80 days. He has done it all… well nearly!

To get a tee off time at the Top 100 golf courses in the world is a serious challenge on its own. It’s not only the likes of Pine Valley, Cypress Point and Augusta National that are difficult to access, there are more than thirty courses in the USA that are intensely private, where getting a game is strictly by invitation only.

Another obstacle is for du Preez to raise enough money to pay for the trip. Expenses include very expensive rounds of golf, flight tickets, car rentals and accommodation. Take all of these expenses into account and factor in the challenging Rand exchange rate and your don’t have to be an accountant to realise that this is a very expensive exercise.

Even though du Preez will be extremely busy during the 80 days, there will be a lot happening behind the scenes. Du Preez plans on taking a good friend to make sure he raises as much awareness and funds for the various charities involved. Warren Green will be du Preez’s caddy, getting to walk the Top 100 courses, but Green won’t be allowed to play. Green’s job is to keep the world updated on Twitter and Facebook as the whole adventure unfolds.

Two of the charities du Preez will be supporting during this adventure will be the Gary Player Foundation and The Ernie Els Centre for Autism.

“I have been so privileged to play golf on some of the most spectacular golf courses in the world, and through this experience I have raised a lot of money for charities. Now I can take the plea for help to a world wide stage,” du Preez said.

Naturally, organizing the whole project has taken quite some time and has resulted in sleepless nights for du Preez, with many more surely to come. Du Preez has so far managed to get tee off times at only 40% of the Top 100 courses, but he’s confident that he’ll have them all in place by October this year.

Du Preez aims to raise funds for this project through various golf days planned for this year, as well as corporate sponsorships, in return for local and international exposure for participating organisations.

To get in touch with Du Preez, visit his website at www.radicalgolf.co.za.

To see the list of the World’s Top 100 golf courses that he’s aiming to play, visit the Top 100 website: http://www.top100golfcourses.co.uk/htmlsite/topcourses.asp