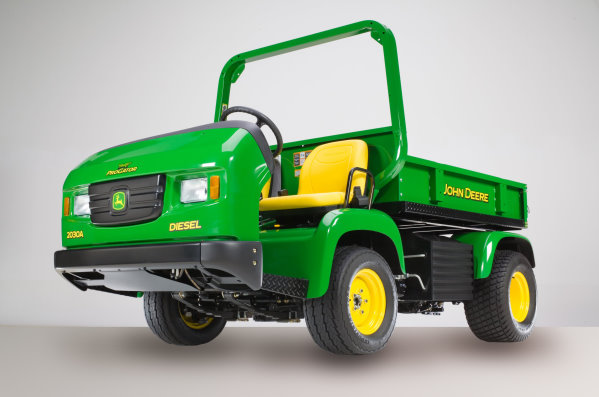 John Deere’s 24hp ProGator 2030A diesel utility vehicle has been improved for 2012 with the addition of hydraulic disk brakes on all four wheels for increased performance, and a higher maximum payload capacity of 1594kg.

This new version of the heavy-duty, two-seater ProGator also features enhanced styling, including a green two-post ROPS frame in common with other John Deere self-propelled machines. It can be equipped with a standard tipping cargo box for use as a general materials transporter, or with specialist turf maintenance equipment for a wide range of applications in the golf & turf and commercial groundscare markets.

These include sprayers (such as the John Deere HD200), spreaders, top dressers (including John Deere’s own TD100), materials collection systems and other equipment capable of utilising the vehicle’s factory installed auxiliary hydraulic services.

The ProGator has a five forward, one reverse speed synchronised transmission, now with a tighter gear shifting pattern, and a maximum speed of nearly 20mph. It offers a choice of two- or optional four-wheel drive plus full front and rear suspension, hydrostatic power steering and a large 30-litre fuel tank. The tilting steering wheel has five positions for maximum driver comfort.

Cargo box capacity is 876kg and towing capacity at the rear hitch is 680kg, while overall payload capacity with driver, passenger and loaded attachment has increased by nearly a third. An optional cab can also be fitted in place of the ProGator’s standard ROPS frame.