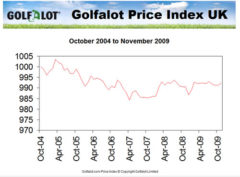 The Golfalot.com Price Index in November enjoyed growth of almost 1% as the Club sector rallied to cancel out an overall drop in the Accessories sector.

As predicted last month the Index was boosted by an injection of new products as retailers took delivery of new stock in time for the hoped for Christmas rush. The Irons category led the in the Clubs sector with the introduction of the Cobra S2 and S2 Forged irons marking a strong month for premium sets. With irons from both Titleist and Callaway recovering their prices after discounts in the last couple of months, even a drop in the price of some of the Nike Victory Red range could not stop the Irons sector racing to a 2.8% rise.

With the first of the eagerly anticipated Nike Method putters hitting the shops along with the NCX-Ray series from Never Compromise, the Putters category also posted solid growth with a jump of 2.5%. This is a strong sign of encouragement with new models from Titleist and Callaway still to come. Two new Nike drivers, the VR STR8-Fit Tour and the SQ Machspeed were the catalyst for growth of 2.2% in the Drivers category while the Utilty Club category rose by just under 1%.

The Wedges category fell back in November with a drop of exactly 1% caused by widespread reductions as retailers wait for new models from brands such as Cleveland, Titleist, Callaway and Mizuno while the Fairway Woods category fell by just over 2% after last month’s gains. Despite these small setbacks the Clubs sector’s growth of 1.6% was the most successful month it has enjoyed since February 2009.

A fall of 2.7% in the Trolleys category overshadowed some strong performances elsewhere in the Accessories category as it fell by just over half a per cent. The relatively large fall in the Trolley category was caused by some mid and top end products falling out of the Index and some lower priced models entering for the first time or being reintroduced.

There was brighter news elsewhere in the Accessories sector as the remaining three categories made gains. The Golf Ball category grew by 3.1%, a heartening result as it was achieved with the lifting of reductions on models like the Nike One range and means the category can look forward to more good news as new products arrive over the coming months.

The Golf Shoes category, powered by the introduction of the Adidas Tour 360 4.0 at the premium of the market, matched golf balls with growth of 3.1%. New models from Titleist, Sun Mountain and Powakaddy helped the Bags category to a rise of 2.4%

Although the overall rise in the Golfalot Price Index of just under 1% is relatively modest it does represent the highest growth since July and the fourth highest of 2009. After a few months of losses and consolidation November has brought with it some good cheer as the Index is up half a per cent in the last 12 months.

With certain individual categories performing so strongly, and others still to feel the reinvigorating benefits of new stock, the November Golfalot Price Index is a source of great optimism as manufacturers, retailers and consumers look forward to the surge in Christmas shopping expected over the next few weeks.