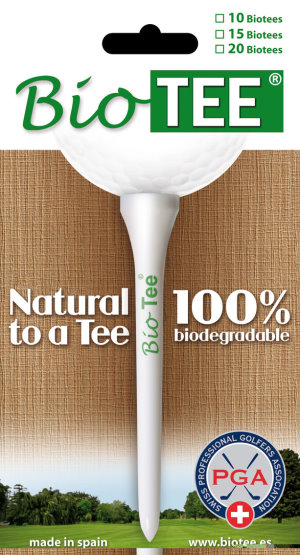 There will come a time when a business like BioTEE® is not news any more, writes Dominic O’Byrne. At a point in the future when the care and management of golf courses has become so sophisticated and efficient that golfers know about caring for their playing environment as second nature, discarded tees that disappear into nature quickly will be the norm.

Until then, Madrid-based eco-engineers BioTEE® have a great deal of work to do in addressing one of the worst blights to affect golf clubs throughout the world: pollution of golf courses.

Although based in Spain, BioTEE® stakeholders are reaching out to golfers and golf businesses the world over with a very simple, but powerful message – TEES MAKE A DIFFERENCE.

Since a dozen or more EU countries banned smoking in leisure venues in the ‘90s and early 21st century, we can certainly see fewer discarded cigarette butts around golf courses. This is a source of pollution and degradation of golf course environments that all golfers can relate to. Just as damaging, however – although certainly seen as more acceptable – is the sight of broken and discarded tees.

Depending on your ecological standing (or sense of the aesthetic) this occurrence can be regarded as anything between never noticed it to it drives me mad. For golf course owners, it also represents a significant overhead in estate maintenance, and one – that inevitably – has to be passed onto golfers in the shape of increased membership and green fees.

“Some may say this is a small aspect of the golf business,” says BioTEE® managing director Germán Cabanillas González. “But it will become increasingly important as time goes by. And those who take it seriously now, will be those who are proved to be genuinely effective in responsible golf product development.”

BioTEE® insists that theirs is the only 100% biodegradable tee on the market. The brand boasts a list of impeccable certification bodies that underwrites BioTEE® ’s credentials, and they manage this by keeping tight control of the entire manufacturing process. The bio-plastic used in the manufacture is from renewable sources and complies fully with all US and European biodegradation regulations.

The market for this kind of product is healthy and growing. But for those golfers with an eco-conscience (or indeed for golf clubs with a strong enough environmental policy to ensure ‘green’ products are stocked in the proshop) the message has to be If you’re buying eco-friendly tees, don’t waste time with inferior alternatives… go straight for the BioTEE® .

“Golf benefits from a population demographic that is confident, competitive, intelligent, focused and often affluent,” explains Germán Cabanillas González. “Teesmight well be the most unimportant and disposable of all golf consumables, but by association it is also the easiest way for golfers to make a statement about preserving the playing infrastructure. In time, this kind of foresight will be rightly credited as having been the standard-bearer in preserving the game for future generations.”