Solheim Spectators Can Set Their Own ‘World’ Record At Gleneagles

Golf fans at next month’s 2019 Solheim Cup at Gleneagles (2nd hole on PGA Course pictured above) will walk the equivalent of 20 times around the world as organisers reveal the health and wellbeing benefits of attending Scotland’s showpiece sporting event.

A crowd of almost 100,000 people are anticipated to flock to Perthshire in September for the biennial Europe v USA contest, with the European team captained by Solheim Cup stalwart and Scottish golfing legend, Catriona Matthew.

The Golf and Health Project features leading studies undertaken by University of Edinburgh in partnership with The World Golf Foundation and The R&A Led by the European Tour Chief Medical Officer, Dr Andrew Murray, the research analysed the health of wellbeing associated with golf, both from a playing and spectating perspective.

Playing regularly was associated with improved physical health, wellbeing and length of life. Studies of golf spectators in Scotland also suggest that fans following the action round Gleneagles for one round may: 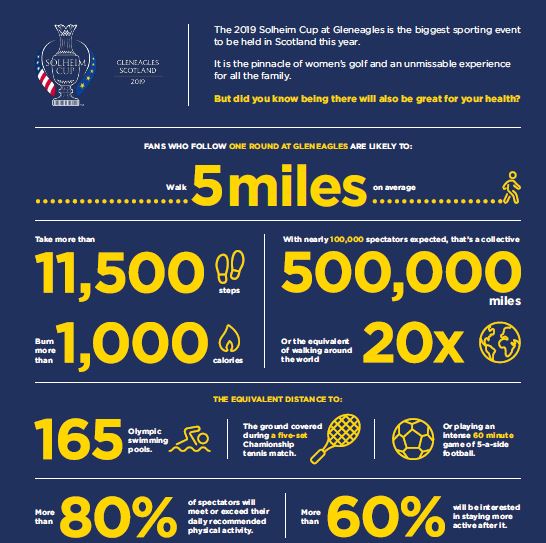 Solheim Cup health infographic FVBased on scientific knowledge of the average steps taken by spectators in Scotland, and an attendance of 100,000, spectators wold collectively walk the equivalent of 20 times around the 25,000-mile circumference of the Earth.

The research also showed that spectators not only value watching world-class golf at close quarters, but also enjoy the benefits of fresh air, time with friends and family, and health enhancing physical activity which is further enhanced by green space and connection with nature.

Most spectators at the Solheim Cup are expected to walk significantly farther than the recommended 7,500 to 10,000 steps and indeed further study showed that when spectators hear about the health benefits of walking from their favourite golfers, it can inspire them to be more active after the event, potentially providing a health legacy. Indeed 40% of spectators reported being more active three months after receiving health promoting messages at a European Tour event.

This could be extremely important as physical inactivity is responsible for more than 3m deaths worldwide – and a lack of activity kills six Scots every day. In recent events, more than 82% attendees met or exceeded their recommended physical activity while spectating; with 60% of those interested in becoming more physically active post-event.

Dr Andrew Murray, lead researcher in the Golf and Health research, believes the 2019 Solheim Cup will re-emphasise the unique benefits of spectating.

“The 2019 Solheim Cup is another world-class sporting event to celebrate in Scotland and while the spectators can’t win the trophy, they can certainly celebrate their own health and fitness success,” said Dr Murray, who will be on-hand at the event as medical director.

“We know from the 2018 International Consensus on Golf and Health that golfers live longer than non-golfers but the benefits of golf spectating can be significant: following your favourite player or pairing around Gleneagles in September, even for one day, will exceed many of the government recommendations for physical activity, whether it’s number of steps, miles walked or calories burned.

“There are no comparable sports where the benefits of going along to watch can have such a positive impact – especially to those friends and families who will be attending for the duration and may walk up to five miles per day for every day of competition.

“The message for the spectators already planning to go, or those who have yet to confirm, is simple: enjoying the best of women’s golf will make you healthier, not just physically but the benefits of walking outdoors, getting all that fresh air, is also known to improve people’s mental wellbeing. Try to maintain regular exercise after the event too – 30 minutes of walking five times per week decreases risk of early death by 30% and can help prevent and treat over 40 diseases such as heart attacks, type 2 diabetes and depression.”

Joe FitzPatrick, Minister for Public Health, Sport and Wellbeing, echoed Dr Murray’s message that the 2019 Solheim Cup will positively impact the health and wellbeing of everyone who takes in the event.

He said: “I warmly welcome this research from the Golf and Health Project which emphasises the health benefits of attending the 2019 Solheim Cup at iconic Gleneagles. The findings prove that spectating at a golf event is an active pursuit.

“While the primary factor for fans will be seeing up close the best of USA and Europe battle it out for the greatest prize in women’s golf, the supplementary benefits are almost as compelling. The more spectators explore the beautiful golf course, the greater the impact on their physical and mental wellbeing.

“With a wealth of measures in place to make the Solheim Cup as accessible as possible, these benefits can be widely enjoyed. It’s a win-win situation and one we are keen to highlight because we want to create a memorable experience for everyone who attends.”

The 2019 Solheim Cup takes place between September 9thth to 15th and tickets start at £25 for the Opening Ceremony. Children under-16 go free when accompanied by a paying adult. For more information visit www.solheimcup2019.com/tickets

For more details on the golf and health project visit www.golfandhealth.org