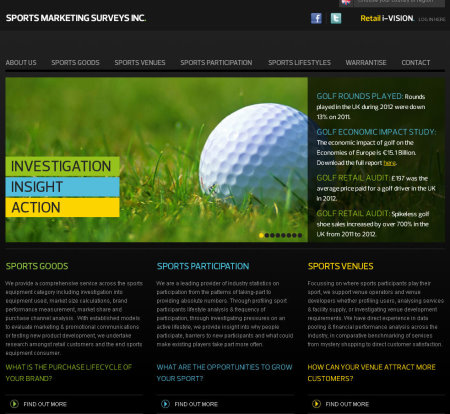 For many people in the golf business attendance at the pre-Open Championship lunch hosted by the British Golf Industry Association with HSBC Golf Roots and SPORTS MARKETING SURVEYS INC is one of the highlights of the week.

It concludes with John Bushell of SPORTS MARKETING SURVEYS INC. sharing some of the insights that have come from his firm’s research activities in the previous twelve months

“Sitting here at last year’s Industry Lunch,” said John, “We were unknowingly in the early stages of a year that can only be termed the ‘perfect storm’ for the golf industry.

“When the cold and rain weren’t providing golfers with the excuse to spend a couple of hours longer in bed or at the pub, the Euro2012 Championships and subsequent gripping London Olympic and Paralympic Games provided the extra nudge to keep golfers away from the course.

“August 2012 saw rounds played down almost 900,000 largely due to the ‘Olympics-Effect’. The Games were fabulous with genuine support for Team GB, but the reality for the golf industry was that 2012 and, indeed the start of 2013, has been, for want of a better word, ‘brutal’.

“I don’t want to dwell on negatives, but sometimes we must accept the circumstances and then look at how to build-from-there. So to put our current situation into perspective here are a couple of the key findings.

“In 2012, the UK saw the lowest level of Rounds Played since our records begin, despite a very positive start in Quarter 1.

“A wonderful March – up 11% on 2011 – was followed by some of the wettest and coldest continual twelve months on record. Every month’s temperatures in 2012 were below the 7-year UK average – resulting in rounds played nose-diving.

“2013 has continued in the same vein and as of the end of Quarter 1 2013 we were unfortunately 32% down on 2012’s Q1. A horrible first is that every month between April 2012 and March 2013 showed rounds played down against the 7-year average for that month – which meant each course on average had lost over 4,750 rounds each or nationally for England, Scotland and Wales – just over 12 million rounds of golf against the 7-year average.

Impact of The Cold compared to the Wet

“A recent study undertaken for England Golf Partnership looking at Sport England’s Active People Studies (APS) – which measures participation across sports – from the beginning of the APS monitoring; and SPORTS MARKETING SURVEYS Rounds Played back to 2006; as well as the official Government consumer confidence and unemployment figures, and the Met Office temperature & rainfall figures has resulted in some very important, perhaps surprising, but very relevant findings.

England Golf Partnership has agreed that we can share this insight here.

“Cold Weather has a greater impact on participation than rainfall.”