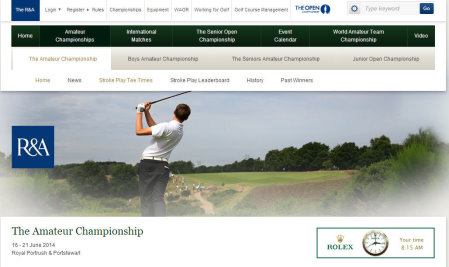 Senior R&A officials are set to investigate the lack of Asian presence at the Amateur Championship, one of the most prestigious events on the amateur golfing calendar.

Asians will be conspicuous by their absence when the 119th edition of the Amateur Championship gets underway at Royal Portrush and Portstewart golf clubs in Northern Ireland this week.

A total of 28 countries are represented in the 288-strong starting line-up. But there’s not a single player from Asia among them.

The Amateur Champion will earn a place in this year’s Open Championship at Royal Liverpool, Hoylake and the 2015 US Open at Chambers Bay in Washington State. Traditionally, an invitation is also extended to play in the Masters Tournament at Augusta.

The offer of such prizes makes it all the more puzzling why Asia’s leading amateurs will not be competing in Northern Ireland.

Euan Mordaunt, The R&A’s Director of Amateur Events, said: “It is disappointing that since Jin Jeong (of Korea) became the first Asian winner of the Championship in 2010 that entries have continued to drop from this part of the world.

“The R&A reviews all of its Championship operations on and on-going basis and therefore, as part of this process, this concern will be considered to ensure the Championship continues to be supported from all parts of the world.”

Hong Kong-based Dominic Wall, R&A Director, Asia-Pacific, said he will be meeting representatives from the Championship Department during next month’s Open ‘to look into this matter’.

“We will review this matter and hopefully develop some strategies to address this matter,” said Wall. “I think with the Youth Olympics, Asian Games and World Amateur Team Championships all being in Asia this year that some countries may be putting all their resources into these events.”

Fifteen golfers from Ireland and Northern Ireland, 29 from Scotland, 63 from England and six from Wales have made the draw this week that also features 13 top players from the United States alongside competitors from as far afield as Argentina, Colombia, Mexico and New Zealand.

Mordaunt said: “The support for amateur golf has always been strong in Ireland and Northern Ireland and The Amateur Championship is a wonderful opportunity for spectators to watch amateur golf at the highest level played at two of the finest links courses in the United Kingdom. We have an excellent international field and it promises to be a great week of golf.”

The first two days of The Amateur Championship comprise stroke play qualifying over both courses before the field is cut to 64 and ties and the match play format finds the champion over the final four days’ play at Royal Portrush.