The Scottish golf tourism industry was out in force in the US last week as the country looks to build on a hugely successful 2016 during which US visitors to Scotland soared.

VisitScotland, the country’s national tourism organisation, and investment body Scottish Development International led a delegation of 14 Scottish businesses from across the country to the PGA Merchandise Show in Orlando to engage with more than 40,000 PGA professionals, media, tour operators and industry influencers.

Generating in excess of £220 million per year and supporting 4,400 jobs, golf tourism is a vital part of Scotland’s visitor economy and one of the key drivers for US visitors thanks to Scotland’s reputation as the Home of Golf, as well as huge exposure through the hosting of major golf events such as The Open, The 2014 Ryder Cup, the Ricoh Women’s British Open and many others.

Scotland attracts 220,000 golf visitors to Scotland every year while 92,000 other visitors play golf whilst on holiday. There are more than 550 courses across the country, over 400 of which are within an hour of a city or airport. 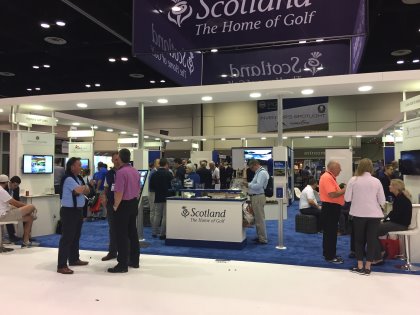 Malcolm Roughead, Chief Executive of VisitScotland, said: “We are delighted to once again be leading a strong delegation of Scottish golf tourism businesses at the PGA Merchandise Show in Orlando. We have seen remarkable and unparalleled growth in the North American market in both visits and spend and it is important to look to build on that momentum into 2017. Of course, a favourable exchange rate has played its part, but a focus on airline capacity and connectivity – with around 90,000 extra seats on services from North America in 2016 – alongside a concentrated marketing approach has proved a real formula for success.

“There is no doubt that Scotland’s reputation as the Home of Golf resonates strongly in the US market and it is important that we continue to promote golf as one of our most important products to a North American audience.”

Golf will remain a key focus of VisitScotland’s marketing activities in 2017 and beyond with the staging of a number of major events including the Aberdeen Asset Management men’s and ladies Scottish Opens and the Ricoh Women’s British Open, all of which will be broadcast live in the US on channels including NBC and The Golf Channel. To reinforce Scotland’s position as the Home of Golf and a great visitor destination, VisitScotland will be running TV advertising campaigns in the US alongside the live coverage of the men’s and ladies Scottish Opens in the summer of 2017.

The Scottish businesses attending the PGA Merchandise Show in 2017 included: