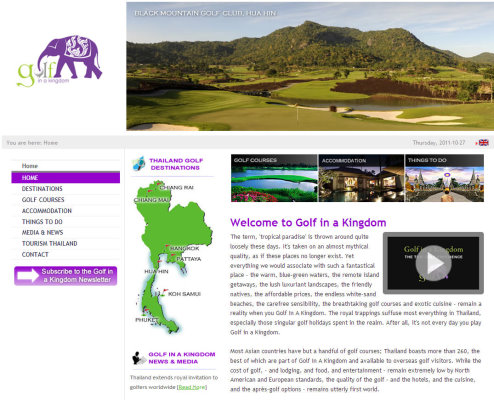 Golf is one of few international tourism sectors continuing to grow despite global economic uncertainty, according to the chief executive of the International Association of Golf Tourism Operators, Peter Walton.

Addressing members of Thailand’s Golf In A Kingdom destination marketing program inBangkok this week, Mr Walton said golf tourism had recovered more quickly than other sectors since the 2008 Global Financial Crisis. And despite continuing problems, especially inEurope, the sector was continuing to grow.

He said international golf tourism was expected to exceed 50 million travellers in 2011, and perhaps reach 55 million, equivalent to the level in 2007 before the GFC.

“Golf tourism bounces back more quickly than other sectors,” he added. “In established markets, one in three golfers plan to travel in the next 12 months. That is a lot more than in other sectors, like skiing.

“We also know that golfers spend 120 percent more per person per day when staying in a resort than other travellers.”

Mr Walton, who is visiting the region from his London headquarters in preparation for the inaugural IAGTO Asia Golf Tourism Convention inKuala Lumpurnext April, also said that whereas only 12 percent of the population in the United States played golf, golfers were responsible for 27% of US travel expenditure.

“While we don’t have figures for other countries, this shows how important golf tourism is in the current international tourism climate,” he said.

Mr Walton later said that Spain, the United States and Thailand were currently the big three international golf destinations, with Turkey and Portugal among developing countries that were rapidly increasing their golf tourism sectors.

“Thailand is very well placed to continue the progress it has made in promoting golf tourism,” he noted.

An example of how the market is growing in Thailand has been the first visit to South-East Asia this month by clients ofUStour operator, Kalos Golf. One group of 37 participants spent five days in Bangkok last week before travelling to Vietnam and Cambodia, also to play golf. A second group of 35 arrives inBangkokthis week where – like the first group – they are scheduled to play the renowned Thai Country Club before also travelling to Vietnam.

Tour manager, Sue Pierce, said the first group’s visit had exceeded her clients’ expectations. “We were welcomed so warmly and everyone had a wonderful experience. We were amazed that despite the flooding around Bangkok, there was no standing water on the course. We have already made a decision to return every year.”

IAGTO has 1700 members in 94 countries and claims that its members are responsible for 80% of golf packages sold worldwide. InAsia, IAGTO has 209 tour operators selling golf in the region in 43 originating countries.

Golf In A Kingdom www.golfinakingdom.com