All Major Holders at BMW PGA Championship next month 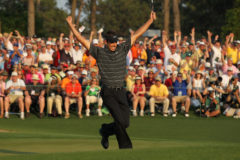 The BMW PGA Championship will make golfing history next month when, for the first time, the current holders of all four Major Championships will tee up in the flagship event on The European Tour International Schedule.

It is the first time that all of golf’s Major men have been European Tour Members and the quartet of champions – Martin Kaymer, Graeme McDowell, Louis Oosthuizen and Charl Schwartzel – will all participate at Wentworth Club from May 26-29.

The final piece of the European Tour Members Grand Slam was completed at Augusta National on Sunday night, when Schwartzel claimed his first Major title at the end of a truly absorbing and thrilling Masters Tournament.

The 26 year old started the day four shots off the lead but a stirring final round 66, which featured birdies at each of the closing four holes, saw him win by two shots from the Australian duo of Jason Day and Adam Scott to become only the third South African golfer after Gary Player and Trevor Immelman to own a Green Jacket.

“Winning at Augusta was a dream come true and, without question, the highlight of my career, and I am really looking forward to coming to Wentworth next month as the Masters champion,” said Schwartzel.

“I finished tied sixth in the tournament in 2009 and in the top 20 last year, so it is obviously a tournament and a golf course that I really like. It goes without saying that I will be trying my best to add the BMW PGA Championship trophy to my Green Jacket.”

Schwartzel’s fellow countryman Oosthuizen will look, on the West Course, to reproduce the sort of form he showed at St Andrews last July, when he won The Open Championship by an astounding seven shot margin, and the duo will spearhead the nation’s attempt to become the BMW PGA Championship’s first South African winner.

Kaymer, who has already won on The European Tour this season at the Abu Dhabi HSBC Golf Championship, finished in the top 20 in both 2008 and 2009 at Wentworth Club. The current World Number One will also be able to draw on the experience he gained at Whistling Straits last August, when he came through a nail-biting play-off to win the US PGA Championship, as he tries to add the BMW PGA Championship to the BMW International Open title he won in Munich in 2008.

McDowell did not need extra holes to win his first Major title, in the US Open Championship at Pebble Beach last June, and he will begin his preparations for his title defence at Congressional three weeks later with his own tilt at the BMW PGA Championship title, a tournament where he finished tied for 13th in 2009.

McDowell and Kaymer, of course, will also be part of the 12-strong winning European Ryder Cup Team who will be reunited on British soil at the BMW PGA Championship for the first time since their memorable 14 ½ – 13 ½ triumph over the United Stated at The Celtic Manor Resort last October.

BMW PGA Championship Director Jamie Birkmyre admitted he was delighted with the way the field for the tournament was shaping up.

“The BMW PGA Championship has always delivered the best in golf and this year, with the holders of all four Major Championships teeing up for the first time, I can guarantee that the thousands of spectators who will come to Wentworth this year will be in for a true golfing treat,” he said.

“All of us who follow The European Tour were thrilled when Graeme, Louis, Martin and now Charl became Major champions for the first time, and they know they will all be accorded a hero’s welcome when they tee up on the West Course.”