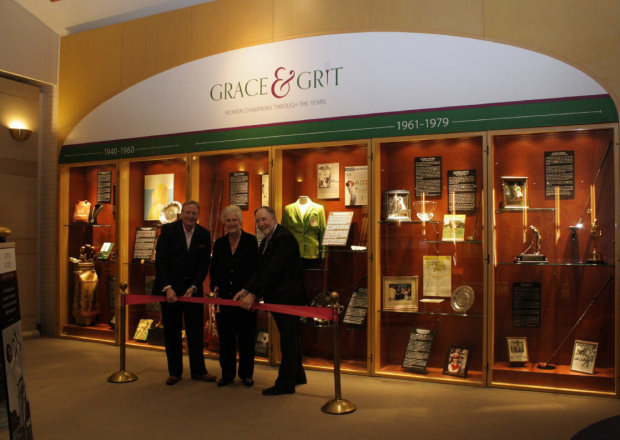 The World Golf Hall of Fame & Museum has officially unveiled its newest exhibition, “Grace & Grit: Women Champions Through the Years.” Located in the Museum’s Shell Hall opposite the Hall of Fame Member bronzes, the exhibit features golf’s greatest female champions spanning eight decades – from the 1940s to today.

As part of the exhibition’s opening, 1975 World Golf Hall of Fame Inductee Kathy Whitworth cut the ceremonial ribbon and addressed more than 100 attendees during a question and answer session.

As 88-time LPGA Tour winner, Whitworth and several of her artefacts, including her Titleholders Championship green jacket (presented to the winner of this Major played at Augusta Country Club) are featured prominently in the exhibit.

“Words can’t express how exciting it is to see my name alongside some of the game’s best like Babe Zaharias, Mickey Wright, Patty Berg and Annika Sorenstam,” said Whitworth. “So many great memories surface when I walk through this exhibit and I am humbled to be part of its opening.”

Among the surplus of player memorabilia, the exhibit features unique artefacts including Ko’s wedges used in the final round of the 2016 ANA Inspiration. Other exhibit highlights include the personal expense report of Marilynn Smith, where she detailed all meals, lodging, and equipment costs from hundreds of golf tournaments. Also on display is Dame Laura Davies’ full-size U.S. Women’s Open trophy from 1987 when she captured the first of her four Major titles in an 18-hole Tuesday playoff, beating out fellow Hall of Fame Members Ayako Okamoto and JoAnne Carner.

The “Grace & Grit: Women Champions Through the Years” exhibition is open to the public in the World Golf Hall of Fame & Museum.