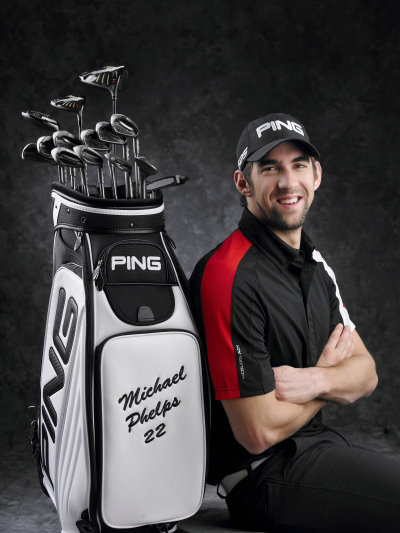 World-champion swimmer Michael Phelps, one of the most accomplished athletes in the history of sport with more than 70 medals in international competition, has reached agreement with PING to play a full set of the company’s custom-fit clubs as he focuses his athletic efforts on the game of golf. His official debut representing PING starts at the Annexus Pro-Am at the Waste Management Phoenix Open, where he is paired with Masters Champion Bubba Watson.

Phelps is the subject of this year’s “The Haney Project” on Golf Channel, an eight-episode reality show documenting his efforts to improve his golf game under the guidance of renowned instructor Hank Haney. The series premieres Monday, February 25, 2013. The native of Baltimore will play 14 PING clubs, including the new G25™ driver, fairway woods, hybrids and irons. For his short game, he’ll rely on the new Tour Gorge® Groove wedges and Scottsdale® TR™ (True Roll) putter.

“I know how difficult the game of golf is, but I’m really serious about getting better and the experts at PING have already helped me a lot,” said Phelps, who first started playing golf five years ago. “They looked at my swing on the range and dialed me into clubs that perfectly fit my stance and swing. Considering how tall I am and the length of my arms, they showed me how important and beneficial it is that I play with custom-fit clubs. Once I had clubs that were built specifically for me, my ball flight improved right away. PING has a long history of helping golfers play better, so I’m excited to see how much I can continue to improve my game with the help of their equipment.”

As the custom-fitting pioneer and leader, PING welcomed the opportunity to help Phelps in his quest to improve his golf game. His 6’ 4” height, long arms and large hand size make him a perfect subject for custom fitting. PING’s club technicians built his G25 irons one inch over standard length, three degrees upright and with grips 1/32-inch over standard size. PING Wrx, the company’s custom shop, added a few special touches to the clubs, including painting the clubs with gold and red, white and blue accents.

“Michael is a legendary sports icon, and we all watched with great pride as he represented the United States while dominating his sport in international competition over the last decade,” said John A. Solheim, PING Chairman & CEO. “We’ve custom-built his clubs to ensure he has every chance to improve and we believe he’ll dedicate himself to golf with the same intensity he gave to swimming. His global presence as a golfer will bring PING tremendous exposure and just as importantly, shed additional light on the game in general.”

Phelps, 27, is widely recognized as the greatest swimmer of all time and one of the most accomplished athletes in the history of sport. Over the course of his 16-year career, Phelps amassed more gold medals, world championships, and world records than any other swimmer.  He established the Michael Phelps Foundation in 2008 to help promote the sport of swimming and encourage active and healthy lifestyles, especially for children. Phelps hosts the Michael Phelps Foundation Golf Classic that serves as an annual fundraiser for the Foundation.