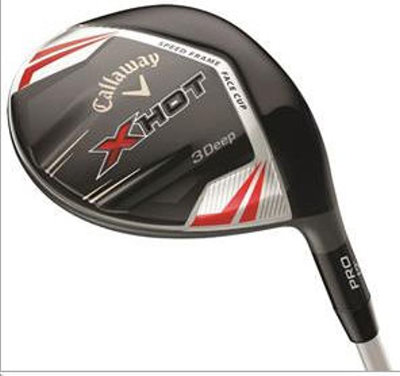 Carding birdies on four of the final six holes to match the low round for the tournament and claim his fifth major victory, Phil Mickelson relied on Callaway Golf (NYSE: ELY) equipment and an Odyssey putter en route to a remarkable victory at Muirfield in Scotland on Sunday. Mickelson started the final round five strokes behind the leader and went on to win by three strokes. On the 71st hole, Mickelson used his Callaway X Hot™ 3Deep Fairway Wood off the tee and then again from the fairway – with 308 yards into the wind to the green – to put himself in great position for an eventual birdie putt.

Later, Mickelson noted, “Those two 3-woods were the two best shots of the week, to get it on that green.”

During the awards presentation, Mickelson thanked Callaway technicians for their efforts.

In his bag this week from Callaway Golf and Odyssey:

Born from X Hot™ Fairway Wood technology, the Callaway X Hot 3Deep is derived from Tour players’ desire for a deeper faced 3-Wood. The Forged Face Cup with the Speed Frame Face increases ball speeds across the face, and the deeper face and lower CG are designed to reduce spin and provide a stronger ball flight for huge distance from everywhere on the course, as Phil demonstrated throughout the weekend and especially on the championship’s 71st hole.

Neil Howie, President and Managing Director of Callaway EMEA, added: “What Phil did down the stretch on Sunday was simply incredible particularly under such testing golf conditions, and he really put his Callaway & Odyssey products to the test when needed. After Ernie’s win last year it is great to have another Callaway staff player as the Champion Golfer of the year.”

The win secured Mickelson his fifth Major title, his second win in as many weeks and marked the 49th overall professional victory of his storied career.