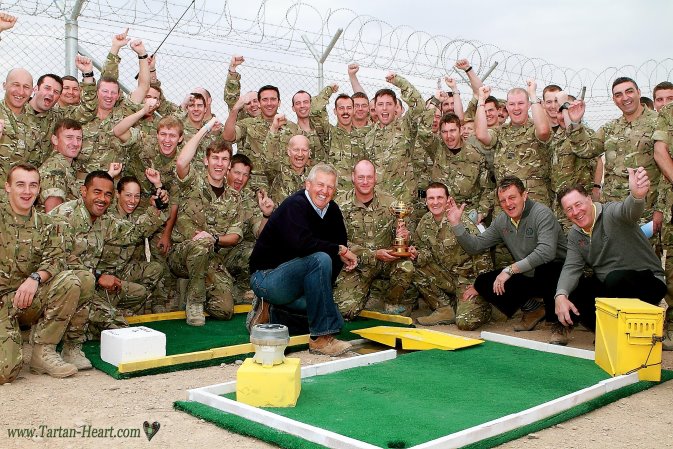 PGA captain Eddie Bullock and Ryder Cup hero Colin Montgomerie helped give British troops a boost with a whistle stop tour of Afghanistan. The PGA organised trip was designed to show support for the efforts of soldiers in helping establish a new future for the war-ravaged country.

The idea for the trip was hatched by PGA chief executive Sandy Jones and Lord Jonathan Marland, chairman of Tickets for Troops, a charity set up two years ago to provide members of the Armed Forces with free tickets for major sporting events, theatre performances, music concerts and cultural attractions.

Since launching, the charity has been given more than 260,000 tickets and over 100,000 troops have registered with the scheme. The PGA has supported the scheme by inviting troops to attend the Ryder Cup and the Open.

The Afghanistan visit also followed on from the work that individual PGA pros are doing across the country for Help for Heroes to support those injured in the line of duty.

Europe’s victorious 2010 Ryder Cup captain took part in a Q&A during an army dinner with Montgomerie also hosting a special golfing masterclass with Bullock and Reilly delivering an insight into the great Scot’s swing.

Bullock, a consultant at Golf at Goodwood, said: “It was just sensational to see the troops and their reaction to us and Colin and the Ryder Cup and it was a wonderful opportunity to engage and connect with them.

“It was also a tremendous thrill to engage with Afghani youths and introduce them to golf. During the golf clinics with the soldiers we had everybody from plus one handicappers to beginners who were just there for the experience. I lost count of how many lessons we gave but it felt like thousands between the three of us.

“My father was in the RAF and I have always had a huge amount of respect and admiration for the forces and I came away with a smile in my heart after meeting the troops.

“This has been a trip I will never forget, the British troops are so professional, working seven days a week without hesitation and when you think of the sacrifice and effort they make on our behalf it is very humbling.” 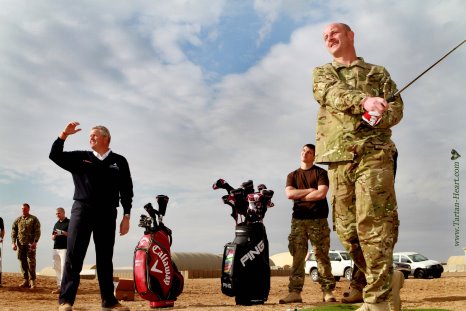 During the three day trip, the trio travelled to Camp Bastion, the British military’s main base in Helmand Province.

At Kabul headquarters they met the Afghan President of the National Olympics Committee, General Mohammad Aghbar and also spent time at the British Embassy, briefing ambassador, Sir William Patey, about the trip.

Montgomerie commented: “I am honoured to have been given the opportunity to represent the PGA along with Eddie Bullock and Parnell Reilly to come to Camp Bastion with the Ryder Cup and give a series of golf master classes to the troops and to show them that we are thinking about them back home and appreciate the difficult job they are doing here to protect not just us but the rest of the world.

“We have had an enjoyable and informative time during our short visit. We have been impressed by the calm and professional way in which everyone seems to be going about their business. We have been made to feel most welcome by all in the camp.”

Reilly, who in 2010 took the Ryder Cup trophy on a helicopter tour of Welsh clubs, described the visit as life-changing.

“It was a humbling experience, it was just an honour to be invited to represent the PGA and go and see the troops,” he said. “The whole camp was buzzing that the PGA had taken the effort to come out and see them. They all shook our hands it was just that little extra time that takes their minds off what they are doing out there.

“Many of the troops love their golf and they had created a special driving range on the Apache helicopter area and it was wonderful to see their passion for golf and to be able to give something back, especially with Colin and the Ryder Cup being there.

“To see what they do out there brings into perspective what dangers they face out there but equally impressive is the quiet, confident way they go about their work and we felt very safe in their hands.”

PING has announced details of its Autumn/Winter 2022 apparel range, which boasts a range of ground-breaking material technologies, including the first to use of graphene in a golf apparel collection.