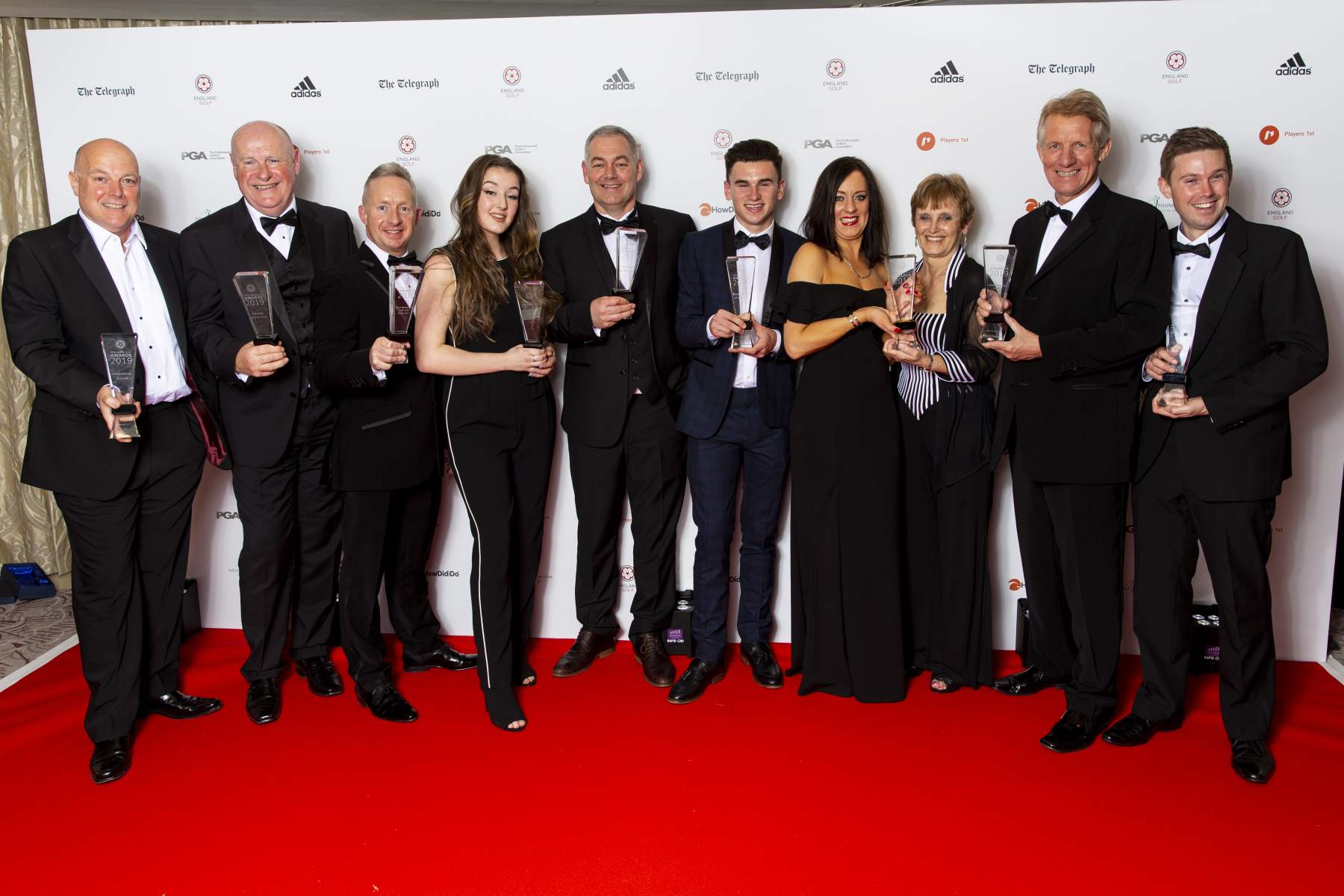 They sent messages to Performance of the Year winner Conor Gough; Lifetime Service Award winner Ian Bonser; Championship Venue of the Year, Stanton-on the Wolds; and County of the Year, Wiltshire.

They were among the nine winners who were applauded by over 400 guests at the adidas Golf-sponsored awards, at the Royal Lancaster London.

Winners also included the pioneers of a scheme which offers golf ‘on prescription’ from GPs, outstanding volunteers who share their love of the game, an inspirational coach who counts himself lucky to work with young players and a club with an amazing welcome for members and visitors.

England Golf Chief Executive Nick Pink commented: “All our award winners are very special and prove that golf is a go-ahead game with a great welcome for everyone and, even better, that it’s good for your health.

“Their achievements are helping to change the image of golf within the wider community and that’s good news for everyone who cares about the game.”

The Award winners were:

Teenage talent Conor Gough of Stoke Park Golf Club, Buckinghamshire, won the Performance of the Year Award after his stunning 2018 season when he won top British and English titles. Tommy Fleetwood, who won this title last year, told him: “What an amazing year! I’ve been keeping track of your progress and we will be doing that for a long time to come, I am sure.”

Ian Bonser of 3 Hammers, Staffordshire won the Lifetime Achievement Award, sponsored by The Telegraph. He has helped countless people to follow their golfing dreams and was congratulated by golfing legend Dame Laura Davies, who told him: “What you have done for golf and all the time you have put in means this award is thoroughly deserved.”

Stanton-on-the-Wolds Golf Club, Nottinghamshire, won the Championship Venue of the Year Award – and the congratulations of Tyrrell Hatton. The three-time European Tour winner was a regular at England Golf championships as an amateur and he said: “I know the golf clubs all go above and beyond to make it a fantastic experience for the players. So massive congratulations to Stanton for winning this award, you guys must have been fantastic!”

Wiltshire Golf won the County of the Year Award and first congratulations came from another European Tour winner, Jordan Smith. He came up through the Wiltshire ranks and commented: “I’m so proud of my county, Wiltshire. For such a small county we have definitely been punching above our weight!”

Mytime Active and its centres at Bromley and Orpington won the new Innovation Award, sponsored by Players 1st, for pioneering golf ‘on prescription’, with impressive results. The project is set to spread to three more centres next month and it’s hoped other golf operators will take it up.

The Exeter Golf and Country Club  in Devon won the Most Welcoming Club of the Year Award, sponsored by HowDidiDo. The club has blended the best of tradition with contemporary style to open its doors and appeal to golfers of all ages. General Manager Chris Jones commented: “On a scale of 1-10, this is 11!

Mark Feeney from West Derby Golf Club in Liverpool won the Volunteer of the Year Award for the way he revitalised the junior section, growing it from two or three players to over 40 members in just a couple of years. “This is wonderful for the club, it’s amazing. It’s not just about what I do,” said Feeney.

Lou McLoughlin of Bromborough Golf Club, Cheshire, became Young Ambassador of the Year, presented in association with the Golf Foundation. The bubbly 18-year-old simply loves helping people enjoy golf. “This is so exciting,” said Lou. “You don’t realise people think so much of you and when you find out, it’s special.”

Aaron Lansberry from Hatchford Brook Golf Centre, Birmingham won the Coach of the Year Award, sponsored by The PGA. The inspirational coach puts the fun into golf for hundreds of youngsters, counts himself lucky in his work and commented: “It’s lovely to win, it’s the cherry on the cake and it backs up all the hard work we do.”