Donald named Golfer of the Year 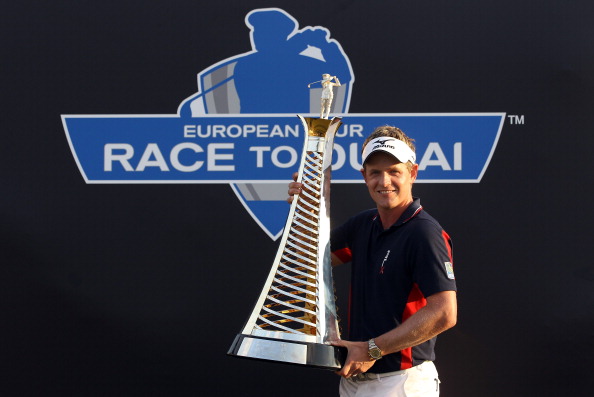 Luke Donald has been named The 2011 European Tour Race to Dubai Golfer of the Year after a truly remarkable and record-breaking year on both sides of the Atlantic.

The 34 year old Englishman not only ended 2011 as the undisputed Number One on the Official World Golf Ranking, he also became the first player to officially top both The Race toDubaiand the US PGA Tour Money List in the same year.

The judging panel, which featured golf journalists from newspapers and magazines as well as commentators from radio and television, were fulsome in their praise of several other worthy candidates, specifically Major Champions Darren Clarke, Rory McIlroy and Charl Schwartzel. But it was Donald’s historic achievement, allied to the consistently high standard of his golf throughout 2011, that saw him voted the unanimous winner.

“To have the accolade of European Tour Golfer of the Year means an awful lot to me and I will certainly look back on this year with a lot of fond memories,” said Donald. “It is always nice to be appreciated, especially from the people in the sport who know the game inside out. They have recognised what I have done this year and it is very gratifying to have that validation.

“As a professional golfer you are always trying to do your best and it was good to see all the hard work I have put in coming to fruition. I was delighted with my game this year and it is rewarding to feel that, sometimes, consistency does pay off. Everyone dreams of having a year like this and I am very excited and feel fortunate that it happened to me.

“Rory’s win at Congressional was amazing as was Darren’s success in The Open while Charl birdieing the final four holes to win the Masters was a truly magical moment in golf. Therefore, to be given the vote ahead of these great players who also had great years is very special indeed.”

Donald won three times on The 2011 European Tour International Schedule; the World Golf Championships-Accenture Match Play inArizona, the Barclays Scottish Open at Castle Stuart and the Tour’s flagship event, the BMW PGA Championship at Wentworth Club where he beat fellow countryman Lee Westwood in a play-off. The latter success, at the end of May, saw him climb to World Number One for the first time – a position he still holds.

Coming to the final event – the Dubai World Championship presented by DP World on the Earth Course at Jumeirah Golf Estates – his coronation as European Number One was not certain however, knowing he had to finish inside the top nine to finally extinguish any hopes McIlroy had of pipping him at the post. An opening level par 72 left him well down the field but he showed his class with closing rounds of 68-66-66 to finish the tournament in third place overall.

Equally as impressive was his finish in the final counting event of the US PGA Tour season, the Children’s Miracle Network Hospitals Classic. Knowing he had to finish inside the top two to deny Webb Simpson in the race for the US PGA Tour Money List, Donald produced a stunning closing 64 – which featured six birdies in a row on the back nine – to win the tournament outright.

“The manner in which I came through to win both money lists was, I think, the thing that pleased me the most about the season,” he said. “Going to Florida and winning that tournament when I had to was very important as it gave me the incentive to go on and succeed in Dubai.

“There was a lot of pressure on me to come through that week and so, after my first round, to shoot 16 under par over three rounds to get the job done was the icing on the cake and something which gave me a huge amount of satisfaction and confidence to take forward into next year. This game always gives you the opportunity to improve and hopefully I can continue this form into 2012 and find some way of getting even better.”

In total, Donald finished a cumulative 90 under par for the season on The European Tour and 116 under par on the US PGA Tour, not taking into account the two match play events he contested – the WGC-Accenture Match Play, which he won, and the Volvo World Match Play Championship inSpainwhere he was runner-up.

Bill Elliott, Golf Monthly contributor and Chairman of the Association of Golf Writers, said: “When we considered the candidates for this award 12 months ago, after the success that European Tour Members had enjoyed on the world stage in 2010, we all thought it could not get any better than that – but, amazingly, it has.

“These are truly extraordinary times and while the Major Championship victories of Charl Schwartzel, Rory McIlroy and Darren Clarke this year were momentous occasions and ones which all of us who love this game celebrated royally, the overriding achievements of Luke Donald throughout the season stand at the very pinnacle.

“Any one of the four players mentioned would be worthy winners of the award but while perhaps Rory’s eight shot win in the US Open Championship was the single best performance of the year, Luke was unquestionably the overall golfer of the year. He is a credit to himself, to his family and to The European Tour, and he is a true ambassador for the game.”

Derek Lawrenson, golf correspondent of The Daily Mail and Vice Chairman of the Association of Golf Writers, said: “Luke Donald’s golf this year has been, on occasion, sublime, but most of the time, simply superb.

“He is not the type of person to shout from the rooftops about his many achievements but all of us who comment on golf should do precisely that because, in many ways, he has redefined the way we think about the game. He is, therefore, a most worthy winner of the Golfer of the Year.”

James Haddock, Sky Sports News golf reporter, said: “When you are at the pinnacle of any sport you are there to be shot at but, week in week out, Luke Donald performed at the very top of his game with a level of consistency and mental strength which was almost unbelievable.

“Not only that, every time he needed to do something – like produce a shot to win the BMW PGA Championship at Wentworth Club; produce a low round to win the final event of the US PGA Tour season; or produce a four round performance to cement his position as winner of The Race toDubai– he did just that.”