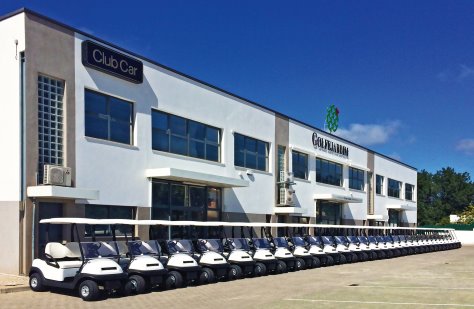 Club Car’s longest serving European distributor has been recognised for its 30-year contribution to the business.

José Sabino, General Manager at Golfejardim, Club Car’s supplier in Portugal, has been presented with a commemorative plaque, acknowledging the hard work and commitment of the company to the world’s largest manufacturer of small-wheel, zero-emissions electric vehicles.

Since establishing Golfejardim in 1983 with an initial workforce of just four employees, the company has grown the Portuguese market share for Club Car, an Official Supplier to The 2014 Ryder Cup, to 75% and now has a staff of 20.

José attributes these achievements to Club Car’s reliable, well-designed, high quality products, and its attention to, and consideration for, its customers’ demands over the years.

“In the 80s, it was more commonplace to hire a golf car for a round in the US than it was in Europe, where people were still more inclined to walk the course,” commented José Sabino.

“However, the boom of golf course development in Portugal in the 90s, and in particular the construction of more championship courses, led to a significant growth in Portugal’s golf tourism and helped create the tipping point for an increased demand of golf cars by both players and courses.

“At the time, visitors were coming from all over the world to play the new signature courses, and consequently, expecting high levels of customer service and access to first rate facilities and amenities. People were increasingly adopting an American style of playing golf, which clubs, courses and resorts quickly realised opened up a new, lucrative revenue channel.”

Of Golfejardim’s long-term relationship with Club Car, José Sabino said: “The company has always aimed to be at the forefront of the golf car market, positioning itself as an industry leader, constantly striving to adopt innovative, forward thinking approaches to its product development. This, coupled with its exemplary customer service ethos, chimed with where we wanted to be within the golf industry in Portugal – and the fit was perfect.”

Marco Natale, Club Car’s Vice President for EMEIA, added:” Club Car identified Portugal among the first European countries it wanted to expand and distribute its golf cars to outside the US – and Golfejardim helped put us on the map.

“The golf car industry has changed considerably over the years, with increased numbers of players requesting vehicles for their rounds, changing habits andthe expansion of golf course operations and facilities.

“However, the one consistent has been the continued hard work and loyalty to the business fromJosé Sabino and his team at Golfejardim, who have contributed towards Club Car’s overall success. This was our chance to say thank you.”