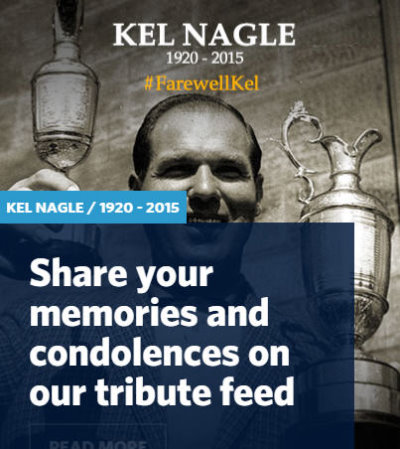 It is with a heavy heart that the PGA of Australia advises the passing of one of Australia’s golfing greats, Kel Nagle.

Nagle passed away peacefully at 1.30 this morning at Mona Vale hospital. He was 94. Born in 1920 in New South Wales, Nagle has been one of the PGA’s most revered Members for the past 75 years.

“It’s a sad day for golf, we’ve lost a Champion of our game,” said Brian Thorburn, Chief Executive Officer of the PGA. “On behalf of the PGA and the Membership, our thoughts and sympathies are with the Nagle family at this difficult time,” he added.

Known as Mr. Modesty, Nagle won a tournament every year for 26 years and was a true gentleman of the game.

Nagle, who turned Professional in 1946, was a consistent victor around the globe from 1949 to 1975; securing 61 wins on the PGA Tour of Australasia and two on the PGA TOUR.

Nagle’s first big victory came in 1949 at the Australian PGA Championship – an event he went on to win a further five times between 1950 and 1968 and still holds an unbroken record of six wins.

In Britain and America, Nagle won the 1960 Open Championship (in its centenary year) at St Andrews and finished second in a playoff with Gary Player in the 1965 US Open. At the time, Player was quoted as saying that Nagle was “one of the best short game players he had ever seen.”

Nagle’s other achievements have included wins at the 1954 World Cup (Montreal), and 1959 World Cup (Melbourne), both in partnership with five-time Open Champion, Peter Thomson, and the 1964 Canada Open.

Nagle teed off in 145 events on the PGA TOUR throughout his career.

He continued to play in Australia before joining the PGA Senior Tour (now Champions Tour) in America in the 1970s where he played 102 events from 1981-1989.

In 1980, Nagle was awarded the Medal of the Order of Australia (AM) for service to the sport of golf and following this, in 1986, was inducted into the Sport Australia Hall of Fame.

Nagle’s outstanding performances in Australia and around the globe were formally recognised in 2007 when he received golf’s highest honour – induction into the World Golf Hall of Fame.

Nagle’s legacy will continue to live on through the Australian PGA Championship, with the Kel Nagle Plate awarded annually to the best performing rookie.

Nagle had a distinguish career admired by many and will be forever remembered as a champion of Australian golf.

The Nagle family request their privacy while arrangements are being made.

The Amundi Evian Championship, one of the five major tournaments in professional women’s golf, has announced an increased prize fund for this year’s tournament, which takes place at the Evian Resort in France from July 21-24.