Top tips for senior golfers: Peter Dawson’s ‘Now for the back nine’

Peter Dawson, a 69 year old British PGA Master Professional, former Ryder Cup player and one of Golf Monthly’s top 25 coaches, has written a new book:‘Now for the back nine’ (www.nowforthebacknine.co.uk)

Published with help from his partner in this venture, Simon Hawkins, one of Dawson’s 60+ year old pupils, the book is a timely gift for the senior golfers who represent over 60% of the UK’s golf club members. They form the financial backbone at so many golf clubs, so helping them find new ways to enjoy their golf and extend their playing lifetimes is fundamental to many golf clubs’ futures.

Dawson himself had been struggling to swing the way he used to in the 1970s thanks to arthritis, two titanium knee replacements and a bad back. As he explained: “Generally speaking, I couldn’t do 50% of the things modern golfers – who are usually much younger and far more flexible than me! – are being taught. As I adapted my swing to work within the limitations that come with age, I began to realise no-one was offering senior golfers like myself ways to swing and turn more easily despite the restrictions imposed by bad backs and so on. That idea became my book.”

“It’s all about helping you adapt your swing using simple little tips like, for example, pointing your left foot more to the left to make it easier to extend through the hit into the follow through. And the same applies to the other foot for an easier backswing too!”

“But the book’s much more than just an instruction guide. In my career I met and played with some of the best known golfers of all time, and so my book’s full of quotes and anecdotes I gathered that only those of a certain maturity will appreciate!”

Sales of Dawson and Hawkins’ book are gathering momentum, getting 5 star reviews like this one in Amazon: “Over the years I have read many books on golf coaching, but this is far and away the best I have read. Whilst it is written specifically for the more mature golfer, many of the principles apply equally to golfers of all ages.

The author explains his teaching in an easy to understand style with numerous photographs and diagrams to reinforce the theory. Each chapter is interspersed with various quotes from famous people through the ages, not just golfers, which are both profound and inspiring. 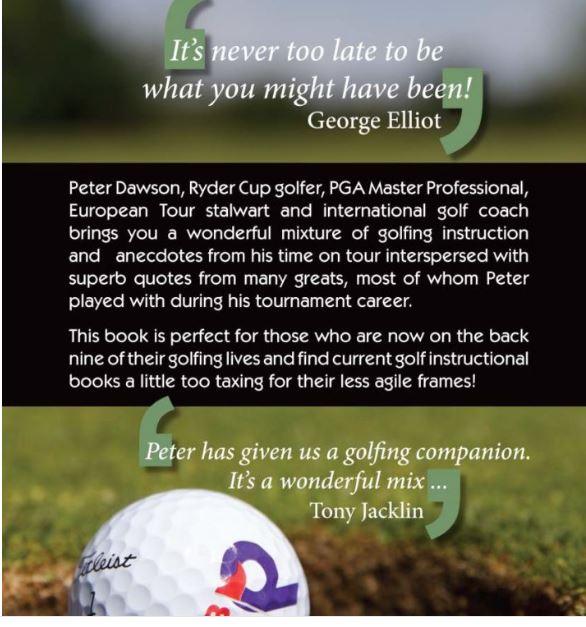 There are several humorous anecdotes relating to the authors life whilst he was on the European tour and representing England/Ireland in the Ryder cup. When I started to read the book I couldn’t put it down, it is a compelling read.”

Dawson himself is also offering golf clubs the opportunity to run one of his clinics and promote his book alongside supporting their preferred charity with a contribution of £5 per book sold, as has already happened at Chippenham GC with the UK Sepsis Trust, and Donnington GC with the Pelican Trust. Signed copies of ‘Now for the back nine’ are available from www.nowforthebacknine.co.uk, and Peter Dawson’s website can be found at www.peterdawsongolf.com.

Born in Doncaster, Dawson was a member of the European Tour in the 1970s. His most consistent season by far was 1977, when he finished seventh on the European Tour Order of Merit, an achievement which earned him a place in the 1977 Ryder Cup and becoming the first left-handed European to play in the competition. He also represented England in the World Cup that year partnering Sir Nick Faldo.

Since 1981 he was the golf director and club professional in Hardelot France, and then Penina and Sao Lorenzo, Portugal. He coached the national teams in Denmark (where his students included Thomas Bjørn), Switzerland and Morocco.

After turning 50, he played several seasons on the European Seniors Tour, with his best finish of 2nd after a playoff at the Tournament Players Championship at the Belfry. He now continues to enjoy his golf, taking more time to enjoy the scenery, the views and the occasional flush strike, and a lot less focus on the hard work of using a pencil and card!

‘Now for the back nine’ www.nowforthebacknine.co.uk