The 100 Greatest Ever Golfers – new book by Andy Farrell 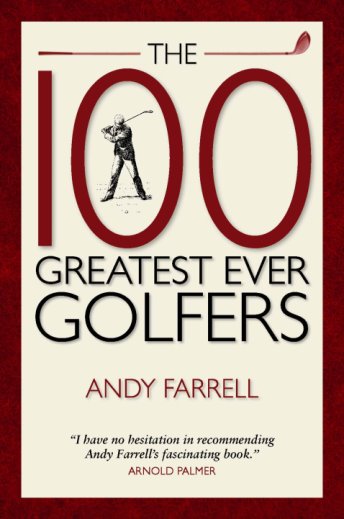 There are as many opinions as golfers in this book, from the debates surrounding who is the greatest of them all – Nicklaus? Jones? Woods? What about Ben Hogan, Arnold Palmer or Annika Sörenstam? – to the arguments over who should be included in such a prestigious list – the top ten may be clear-cut, but what about the last ten, or the ten who missed out?

Golf has always stirred the passions and imaginations of those who love the game, whether pro, amateur or part-time enthusiast. Tracing the greatest golfers back to Allan Robertson, the great Scottish professional whose death in 1859 precipitated the first Open the following year, Andy Farrell harnesses the emotive pull of the game and its players over the years in this fascinating and revealing book.

The greatness that defines these 80 men and 20 women is not just based on who won what, but rather how they played the game, whether with great commitment and dedication, such as Padraig Harrington, who has contributed a foreword, or with a crowd-pleasing flair and personality like Arnold Palmer, who has lent his support as well.

Complete with black and white photos for each of the 100 entrants, The 100 Greatest Ever Golfers arranges its selected golfers by era, from the early pioneers of Robertson and Young Tom Morris, through the great pre- and inter-war players, the Nicklaus-defined decades of the 1960s and 70s, the rise and rise of the women’s game, and then into the rebirth of European golf and the game today.

It is both a celebration of the greatest ever golfers and a chronicle of championship golf, a history of the way the game and its exponents have changed and developed over the last 150 years.

“All the fascinating accounts of the great players in this book make for a terrific read,” writes Padraig Harrington in his foreword.

Andy Farrell is a highly experienced golf journalist and the administrator of the Association of Golf Writers.