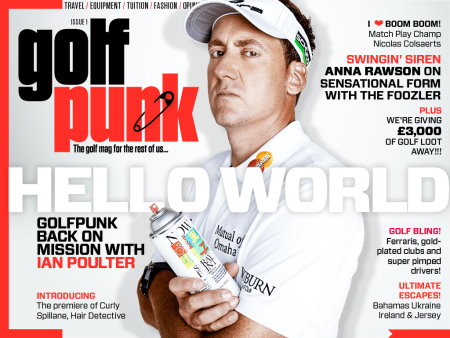 Tim Southwell, the founder of GolfPunk and co-founder of Loaded magazine, announced today that he was re-launching GolfPunk as a digital magazine – http://golfpunk.enjoymags.com/issue01

The digital magazine will be sent to over 600,000 UK golfers, as the brand has partnered with a number of leading golf businesses, including Your Golf Travel, Trendy Golf,  Bunker Mentality and Urban Golf. There will also be Tablet and Smartphone Apps to follow.

The browser based experience will use a brand new platform which has been specifically created for GolfPunk by their design and development team Craft, whose CEO Jason Simmons commented: “GolfPunk is published through the ENJOY platform. ENJOY empowers publishers to deliver rich interactive digital magazines to their readers. Employing cutting edge technology, the platform pushes the limits of possibility and provides a flawless reader experience deployable across desktop and mobile devices.”

Tim Southwell, CEO of GolfPunk Media Ltd, commented: “I originally launched GolfPunk back in 2004. The magazine got a tremendous reception and we won a truck load of prizes, and more importantly a legion of loyal readers, who we believe will want to see GolfPunk restored to its former glory, but now in state-of-the-art digital formats.”

GolfPunk was given a unique commendation from the British Society of Magazine Editors for launch of the year in 2004, and won numerous other awards including the coveted IPA and BSME Editors of the Year in 2006, which recognised Southwell’s editorial excellence. The UK edition ceased publication in 2009 when its then owners, the Jersey based Montpelier Group, stopped supporting the title. Southwell had exited in 2006, at which stage the title had launched 14 international licences.

Southwell added: “It has been quite a journey to get back the brand that I created, and secure the support of investors and the golf trade to relaunch it. In fact the GolfPunk brand is already very much alive, just living abroad in Germany, China and Singapore.”

Southwell concluded:”When we launched GolfPunk back in early 2004 Facebook had only been going for a couple of months, and Twitter wasn’t even a gleam in its creator’s eye. We’ve now got access to these amazing social media tools, as well as Apple’s Newsstand, which we can use to share our content and build a really engaged audience of golf fans both in the UK and globally who want their sport presented in a more compelling way than is currently on offer. By going digital-only we are also freed from the expense and limitations of the traditional newsstand distribution model.”

Southwell is joined by Shaun McGuckian, the incumbent editor when theUKtitle closed, and John Dean, a Founding Director of GolfPunk, who will take a commercial role.