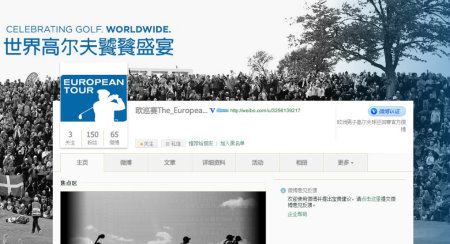 The European Tour has officially launched its Chinese social media channels to bring the excitement of its tournaments directly to the growing number of golfers and fans in China.

European Tour accounts on the Chinese platforms Weibo and WeChat will feature, in Mandarin, live updates, news, information and competitions from all European Tour events and The Ryder Cup, with particular emphasis on local tournaments including this week’s Hong Kong Open followed by the BMW Masters and WGC-HSBC Champions, to be held in Shanghai over the next month.

While growing number of fans around the world are now engaging with The European Tour on Facebook, Twitter, Instagram and YouTube, Weibo and WeChat offer a great opportunity to connect with Chinese sports fans, as well as to learn more about the community as a whole.

Mark Lichtenhein, Director of Digital, Broadcasting and Technology of the European Tour, said: “We are excited to further expand The European Tour’s social media reach through the integration of Weibo and WeChat for China. It is important for us to serve our fans across the globe in their local language, and we look forward to provide our Chinese fans with exciting content and a unique insight to The European Tour.

“The Tour’s website already features in Spanish, German, French and Japanese with further plans to roll out Mandarin and Arabic in the near future.”

Weibo has an estimated 250m users, while the WeChat user base continues to grow, now standing at more than 300m.

Lewis Hannam, Managing Director of Red Lantern, said: “We are really excited to be partnering with The European Tour on this project.

“Chinese social media platforms offer a great opportunity to connect with golf fans in China, as well as learn more about what excites them as fans.

“We look forward to bringing all the excitement and heritage of The European Tour to them – starting with the Challenge Tour event in Chongqing.”