At Peterculter Golf Club, situated on the River Dee among some of the most beautiful scenery in Aberdeenshire, course manager Paul Sharp is seeing the benefits of overseeding with British Seed Houses’ Level Par Velvet Bent.

“We were looking to move to a more sustainable management regime, especially with looming restrictions on chemical availability, and after three years we are already seeing significant reductions in fungicide applications – and thus costs,” he comments.

Peterculter Golf Club was founded in 1989, with push up greens built on the sandy loam soils and over the last four years Paul has been working alongside British Seed Houses to introduce Velvet Bents and reduce the amount of annual meadow grass present.

“I explained our goals to British Seed Houses’ Alistair Eccles and he suggested trialling Level Par Velvet Bent, as it offers the benefits of reduced water, fertiliser and fungicide requirements,” he explains.” We have committed to a four-five year trial period and are beginning to see impressive results.”

Level Par has been introduced at a rate of 70-90kg/ha during the late August overseed, sown with a Charterhouse Verti-Seed in two directions, treating all greens to get an accurate picture of the results.

Seeding is preceded by verticutting to remove the fibrous layer from the sward, and followed by an application of topdressing which is brushed in before the greens are rolled.

“We then aim to reduce operations to give the seedlings chance to establish,” Paul explains. “Height of cut is raised to ensure that the top is not taken off the emerging growth – we make members aware of what we are doing, and use vibratory rollers to ensure that green speeds are not affected.”

The fertiliser regime is also carefully timed so that seeding comes a few weeks after the last feed, minimising competition from other varieties in the greens.

“Establishment is very pronounced after as little as 10 days and this has helped emphasise the value of the seed to members and the committee – the new growth is extremely aggressive.”

And due to the Scottish climate, this impressive emergence has been achieved without the aid of irrigation.

“The Velvet Bents do need less water, but it is a delicate balance because there needs to be enough moisture for the poa to survive. But this year in particular I have not used the irrigation system since the end of June!” 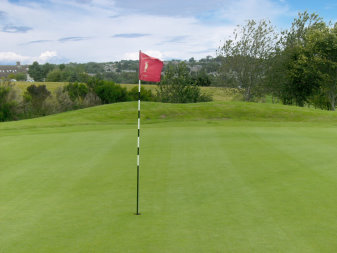 Fertiliser application also needs careful consideration – Paul suggests that it should be possible to cut fertiliser use as the Velvet Bents proliferate, but that it needs to be a gradual process.

“The greens can become ‘blotchy’ – I know the bents would go longer without feeding but not the poa. I’m taking a ‘little and often’ approach to avoid growth flushes and that seems to be working,” he comments. “Overall we have seen a small reduction in fertiliser use, and I know some other courses in this area have achieved a lot more.”

One perceived drawback of Velvet Bent’s vigorous growth is thatch development, and Paul says that this has been the source of much discussion.

“It could be seen as a problem, but the pros of Velvet Bents really outweigh the cons. We have a programme in place to counteract thatch, although it takes some managing as this is such a busy course, and the wet conditions encourage heavy growth. I make sure that we keep on top of aeration – in spring we hollow core aggressively and then backfill with a heavy dressing to tackle thatch. In time, cutting fertiliser applications should also help.”

“One of our major issues was disease, and by introducing Level Par Velvet Bent we have been able to cut our fungicide use considerably, giving major cost savings. For a busy course such as this, sustainable management is already proving its worth.”