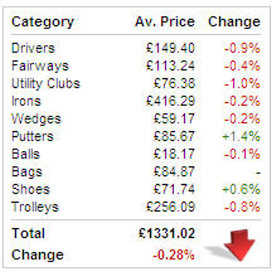 The Golfalot.com Price Index for October continued the trend of recent months with small falls across the majority of sectors reflecting a period of discounting of old models before the 2012 releases wait to enter the Index. Despite this the Index is still up over the last year by more than 3%.

The Golf Clubs Sector fell by -0.2% as all but one of the Categories saw prices fall last month. The Drivers Category fell by -0.9% as retailers competed on popular clubs such as the Callaway Razr Hawk and older models such as the Cobra ZL Driver, which was discounted heavily ahead of the launch of the new ZL Encore in November.  Despite this the Drivers Category remains one of the star performers of the Golfalot Price Index with the average price rising by +14% since October 2009.

Bargain hunters should also look to the Utility Club category as it fell by almost 1% due to some eye catching deals on the Nike SQ Machspeed and Cobra Baffler Rail hybrids. Fairway Woods (-0.4%), Wedges (-0.2%) and Irons (-0.2%) also fell, although a notable new entrant category to the Index in the latter was the very popular R11 Iron from TaylorMade. The only positive mover in the Golf Clubs Sector this month was the Putter Category that posted a healthy increase of  +1.4% fuelled by the entry of the top of the range Ping Anser Milled range.

The Golf Accessories Sector experienced a quiet month with only small price changes across the majority of brands in all Sectors resulted in a small fall of -0.4%. The largest drop (-0.8%) was in Golf Trolleys as retailers battled for market share of the very popular PowaKaddy 2011 Freeway (18 hole).

Golf Balls (-0.1%) and Golf Bags (-0.3%) saw little movement, whilst Golf Shoes were the only positive mover in the Accessories Sector as the late summer sales eased, resulting in growth of (+0.6%).

With October hopefully bringing the late arrival of an Indian summer to much of the United Kingdom, the optimism of golfers hitting the fairways for some warm autumn golf is matched by our outlook for the Golfalot.com Price Index in the coming months. With a number of new product releases expected to bolster the rises of the Index in 2011, the golf industry can prepare for 2012 in a buoyant mood.

This month also sees the release of new interactive online graphs designed to give further insight into the Golfalot.com Price Index. View the new graphs at http://www.golfalot.com/News/PriceIndex.aspx