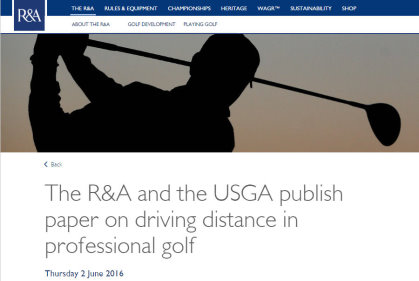 The R&A and the USGA have published a research document that reports important facts on driving distance in professional golf. Supporting data comes from seven tours, including PGA TOUR data beginning in 1968.

Key facts noted in the paper include:

In 2002, The R&A and USGA co-authored the Joint Statement of Principles, which confirmed their commitment to the fundamental notion that skill, not technology, should be the primary determinant of success in the game. The Joint Statement acknowledged the benefits of equipment technology for golf, but noted that any further significant increases in hitting distances at the highest level were undesirable.

Since that time, The R&A and the USGA have continued to monitor equipment technology’s effect on the game, and considered the effects of other factors, such as course setup, athleticism and coaching. When appropriate, new Rules have been introduced after discussions with equipment manufacturers and other stakeholders, in accordance with the Equipment Rulemaking Procedures produced in 2011.

“I believe it is important in terms of good governance and healthy for the sport to achieve greater transparency on key issues such as driving distance,” said Martin Slumbers, Chief Executive of The R&A. “We have decided to publish this report on distance data and will do so each year in the future. This is clearly a frequently debated topic in golf which elicits strong views. By publishing the data we can help to inform the debate and ensure reliable information is available.”

“Hitting distance is, and has long been, a constant subject of healthy and spirited debate in golf,” said Mike Davis, Executive Director/CEO of the USGA. “We want everyone in the game to have access to the facts, to better understand the decision-making process and the research we use to ensure that our game is both enjoyable and sustainable for future generations.”