Jack Nicklaus, the winner of a record 18 Major Champion and a global icon of the game, challenged the golf industry to show the right leadership and seize its opportunity to be an ‘enormous worldwide game,’ while addressing the 2016 HSBC Golf Business Forum at the Marriott Sawgrass Resort and Spa.

Speaking to the annual gathering of the golf industry’s most prominent figures—hosted in the United States of America for the first time—Nicklaus described how he believes golf can gain momentum following a watershed year in 2016, which featured golf’s return to the Olympics, Asia’s first winner of a World Golf Championship at the WGC-HSBC Champions, and maiden winners of all four majors in the men’s game.

In a lively discussion on stage lasting forty-five minutes with Giles Morgan, HSBC Global Head of Sponsorship and Events, Nicklaus, who has paralleled his storied championship legacy with a 50-year career as an acclaimed global course design and founder of Nicklaus Design, gave his insights to the game’s most influential voices, leaders, decision-makers and global innovators. He also provided his thoughts on where he believes golf stands in 2016 and what future direction it needs to take.

“Tournament golf is in a healthy state now—healthier than it’s ever been and still on the rise,” said Nicklaus. “The players showcasing the game at the moment are great for the sports, like McIlroy, Day and Spieth. But what is most important to me is they are great kids, and they represent the game and themselves quite well. The Olympics was definitely a great boost for the game and it was well-accepted. Because of the Olympics, and with medals won by six different countries, the game of golf has been introduced and showcased to a lot of people. We have more than 35 golf federations around the world today than we had before golf returned to the Olympics. It was especially important to many parts of the world where golf is not predominantly played, or new and emerging markets.”

“When deciding on a format, there were issues we faced with certain countries getting enough representatives. I am more a match-play fan, but I’m sure the Olympics format will continue to evolve and be tweaked with time. As long as it helps the game grow, it’s good for golf. Hopefully the IOC will look favourably on golf when deciding if it remains in the Olympics after 2020. Just look at the World Cup of Golf last weekend, with Denmark winning and the U.S. tying for second with China, which is a young golf country. For me, that is a great reflection of the global growth of the game.”

Despite the positive signs from the increased media interest in tournament golf, the game faces significant challenges—be it from a cost perspective, difficulty for some golfers, and a commitment of time. For Nicklaus, an award-winning course designer whose firm has 410 courses in 41 countries, that challenge can partly be associated with the golf ball. 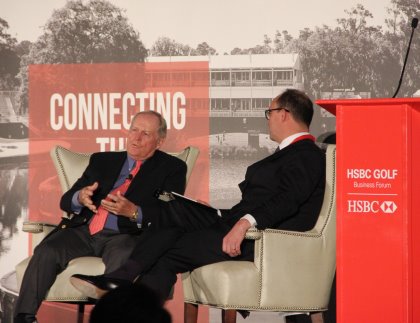 “Fact is, more golf courses have closed in the US in each of the last 10 years than have opened. This is thanks in great part to changes in the golf ball and the distance it travels. Courses have had to change along with it. It’s now a slower game and more expensive than before, and that can’t be a good thing. We don’t want to change the game for the core golfer, but we need to make every effort to offer alternatives to bring more people into the game and keep them in the game. I think we need to develop a golf ball to suit the golf course, rather than build courses to suit a golf ball. Whether it’s a ball that goes 50%, 75%, or 100%, you play a ball that fits the course and your game.

“It’s not that big a deal. We used to do it when travelling to play the Open and switching from the large ball to the small. It took us only a day to get used to a different ball. But when land is a dear commodity and water is scarce, you need to do something to respond to today’s situation. It’s the same in life and business.

“We should continue to look at changing formats. We’ve done 12-hole events, and the feedback among women, beginners, juniors and seniors is that they loved it. If something as simple as that can bring people into the game and keep them, which is important, we have got to get serious about doing anything out of the box or unconventional.”

Looking ahead to 2017, Morgan advised Nicklaus of HSBC’s plans to introduce music on the range at the Abu Dhabi HSBC Golf Championships in January. Asked if it was a good thing, Nicklaus responded: “The world is changing and we need to change with the world. Just look at the Phoenix Open. What they have done there with the par-3 16th hole has certainly proved very popular. I am a traditionalist, and I like to see golf be golf, but adding to things is good. If there is music on the range or on the first tee, the players will get used to it. I never liked the silence. You might just tell the players to get out there and play.”

At the end of an intriguing first morning of the two-day event, Morgan commented: “It was an honour to have Mr. Nicklaus share his thoughts with us today. He holds an unrivalled position in the game, and has insights on the challenges and opportunities golf faces from the standpoint of a player, a designer and businessman. For all who care about this wonderful game, it was refreshing to have such a frank discussion on where the future of the game lies if it wants to become a truly global sport. When a man who is so closely connected with the fine traditions of golf is the one calling for change and innovation in order to remain relevant and get people into the game, surely the industry must listen. As Jack said the world is changing. We can only hope golf will listen to its greatest ambassador and change with the times.”