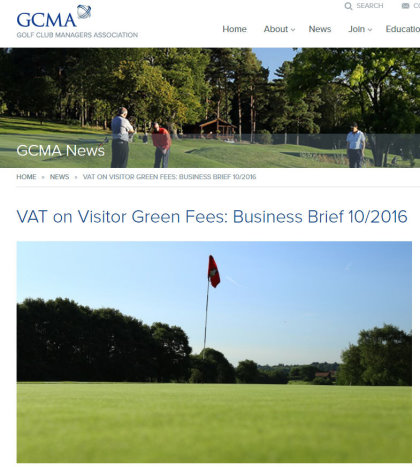 The long running dispute between HMRC and members’ golf clubs regarding the issue of whether visitor green fee income is exempt from VAT appears to be nearing a conclusion, writes Jim Cunning –Golf Management Researcher for the Golf Club Managers Association (GCMA).

Following the decision of the Court of Justice for the European Union in the Bridport and West Dorset Golf Club case, HMRC, following further legal challenge, has accepted that supplies of sporting services made to both members’ guests and visitors by non-profit making members’ sports clubs can be treated as exempt from VAT. Consequently, and after several months of deliberation, HMRC has published guidance for members’ clubs on repayment claims.

In the recently published Business Brief 10/2016, HMRC accept the decision on unjust enrichment – that Private Members Clubs had borne 90% of the cost of the VAT charge – and therefore that clubs are now due 90% of the VAT claimed on overpayment of visitor green fees. HMRC also confirm that the green fee element of corporate golf and green fee supplies to tour operators (Tour Operators Margin Scheme – TOMS) is taxable and claims will have to be adjusted to take this into account. These adjustments, when taken into account, may leave clubs with rather less than originally claimed.

However, whilst clubs are being instructed by HMRC to submit final claims, until refunds actually begin to appear in clubs’ bank accounts, it is difficult to know exactly how long it will be before all eligible clubs receive what they are owed.

The GCMA understands that the agents, such as KPMG, submitting claims on behalf of multiple clubs, are still negotiating the terms of the methodology that will be used to assess the cases of multiple claimants. Clubs will be hoping an agreement is reached soon, as the alternative is for HMRC to go through every single claim one by one, which could hugely delay the process.

Clubs, who have submitted claims independently, must now re-submit their claims and making sure they follow the guidance within VAT Information Sheet 01/15. Those clubs who are represented by an agent should follow their instructions before taking any action. All new claims will be subject to the 4- year time limit.

A number of clubs stand to receive substantial windfalls, which should act as a significant boost to the golf industry. The GCMA hopes that clubs have a sensible plan for any refund they receive, and that there is finally an end in sight to this complicated fiscal saga.