With a star-studded celebrity pro-am getting proceedings underway on Wednesday 27th September and a weekend showdown likely to include not only ex-world No1 Westwood, but also fellow-Englishmen Andrew ‘Beef’ Johnston, Ross Fisher, Matthew Fitzpatrick, Chris Wood, Tyrrell Hatton and 2016 US Masters champion Danny Willett, English fans will be out in force following the ‘Magnificent Seven’ who boast no fewer than 42 European Tour titles between them.
“England in general and the North East in particular are important growth markets for Golf East Lothian members,” says Bob Gunning, Chairman of East Lothian Golf Tourism Alliance, adding, “The British Masters supported by Sky Sports presents us with an ideal, cost-effective opportunity to actively promote Scotland’s Golf Coast brand and present our unique and authentic golf and hospitality portfolio direct to a key target audience.”

And the British Masters, supported by Sky Sports received a late boost when world number-eight Rory McIlroy, the 22-time winner and four-time, ‘Major’ champion confirmed he had accepted an 11th hour invitation from his Ryder Cup team mate Westwood and will tee-it-up at Close House amongst what is a stellar field 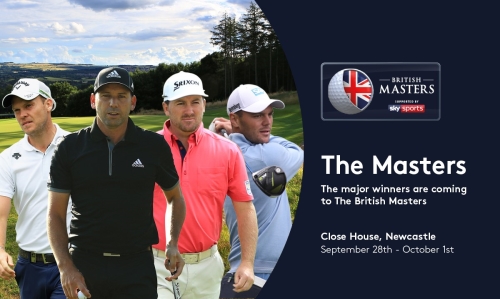 156 players from 30-plus countries across all six continents will join Westwood for what promises to be a feast of great golf, and Councillor John McMillan, Provost of East Lothian and Cabinet Spokesperson for Economic Development & Tourism commented, “This is a fantastic opportunity to take Scotland’s Golf Coast ‘on the road’, promoting our splendid golf courses and wonderful hospitality among golfing fans. We have much to be proud of in East Lothian – so I’m delighted the East Lothian Golf Tourism Alliance has taken this opportunity to showcase our county at a prestigious event. With the Aberdeen Asset Management Scottish Open and Ladies Scottish Open both coming to East Lothian next year, it gives us an early opportunity to lay down a marker for what will be a fantastic fortnight of golf next July.”

British Masters host Lee Westwood said, “It’s great that East Lothian, an area with such fantastic and accessible golf courses, will be part of the spectator village at the British Masters. We’re taking the British Masters to a new area this year, enabling new fans to come along, so hopefully they will be able to enjoy the village as well as the action on the course.”

Scotland’s Golf Coast will be located within the Championship Village close to the Entrance/Exit Complex, between Bridgestone Golf and Zurich, where representatives of Golf East Lothian will be pleased to provide further information on the unrivalled opportunities for great golf and fine hospitality within the County.

It has just been announced that Ryder Cup legend Ian Poulter is joining the tournament line-up. Tickets are now on sale via http://britishmasters.europeantour.com/