A spectacular new chipping green at Sandy Lodge Golf Club in Northwood is the latest attraction for North West London’s golfers, drawing visitors from across the area.

The project to build the 600m2 new green, adjacent to the club’s existing putting green, was managed by Greg Evans, Master Greenkeeper and golf agronomy consultant since 2010. 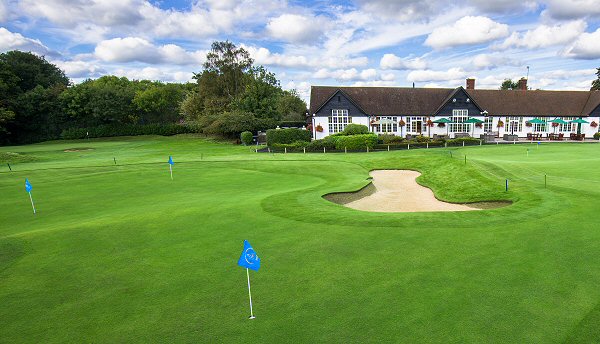 After meeting with club officials in December 2016 to discuss a long-term vision for the Sandy Lodge golf course and practice facilities, Greg Evans was commissioned to uplift course conditions and also to restructure the greens team at the club.

In early 2017 Evans began to draw together a talented team to deliver the first phase, the chipping green. Experienced course designer Ricky Willison, golf architects Weller Designs, and sports turf contractors Profusion Environmental were all appointed, the latter after a tender process managed by Evans in March 2017.

Construction started in June 2017, with a key role also played by the club’s new Head Greenkeeper, Richard Elderfield, who was promoted to head the in-house greens team as one of Evans’s restructuring recommendations.

Profusion handled the key construction, irrigation and drainage aspects of the chipping green project, with Elderfield and his son Michael working alongside Evans on achieving the right growth and turf quality.

By late July 2017 construction was over, followed by an intense growing-in period leading to a new photoshoot in late September, which captured marketing-friendly images showing the new chipping green in late-summer splendour.

“The club’s vision has been spectacularly realised with the new chipping green” said Evans. “The project came together beautifully at Sandy Lodge, with exceptional work from the club’s own greens staff resulting in an international-class playing surface. Early feedback has been exceptional, and it is a stunning addition to one of London’s most acclaimed golf clubs.

“I am looking forward to helping Sandy Lodge progress the next phase of work, as the club raises its standards of conditioning still higher.”

“Greg’s passion for creating great playing surfaces has been amazing to see, and I cannot speak highly enough of him” said David Scammell, Chairman of Greens at Sandy Lodge. “He brought complete professionalism and integrity to the table, and his team-building skills have greatly motivated our greens team.

“His ethos is to work with the dominant grass found on your golf course, and in making that grass perform to its best. The resulting quality has been stunning, and the new chipping green has been widely praised by members and visitors alike.”

David Griffin, General Manager at Sandy Lodge GC, said: “Greg Evans has inspired change across the whole golf course in the last nine months. Not only has this helped me to fulfil my role as GM, but Greg’s influence has also given our members and guests an exceptional golf course to play. The chipping green is the new centrepiece of our practice facilities, and a true showcase for Sandy Lodge Golf Club. It is already attracting newcomers, and is helping us to build for the future.”