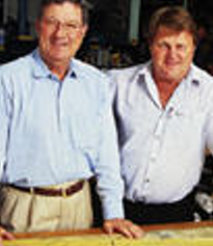 The Rio 2016 Olympic Committee has recognized Thomson Perrett Golf Course Architects as one of the leading golf course architecture companies in the world by including the firm in the 8 company short list to design the golf course which will host the golf event in the 2016 Rio DeJaneiro Olympic Games.

In October 2011, the Rio 2016 Olympic Committee launched a worldwide competition for the architectural services for the golf course to host the 2016 Olympic Golf Event, by releasing a Request For Proposal.

The new course will be the highest profile golf project in the world. Excited by the project and the significance of golf becoming an Olympic sport, Thomson Perrett made a submission.

Submissions were examined by a jury formed by representatives of the International Golf Federation, Rio 2016™, RioCity Halland the Rio2016 Golf Advisory Committee and on 2 December 2011, the Rio Olympics Organising Committee officially announced that eight companies had progressed to Phase 2 of the competition.

Thomson Perrett Managing Director Ross Perrett will now fly toRio DeJaneiroto participate in the next stage. This will be Ross’ third trip toBrazilin the last 5 months, having travelled toBrazilwith the Victorian Government in July and with Thomson Perrett’s local representative in November.

Thomson Perrett’s team for the Olympic course will be led by Managing Director Ross Perrett and his partner Peter Thomson who is a five time British Open winner.

Company principles Peter Thomson and Ross Perrett are very excited to be in the running. 5 time British Open winner Peter Thomson said: “It is very satisfying to be chosen amongst the top 8 golf course architects in the world for this project.”

Managing Director Ross Perrett added: “It is great recognition for the international work our company has done all around the world. It is our experience on over 250 projects in over 30 countries that prepares us for such a project. It is fantastic to be involved. The Olympics will be great for golf in general and a huge launching pad for golf inBrazil. It is very exciting and we look forward to the next stage.”