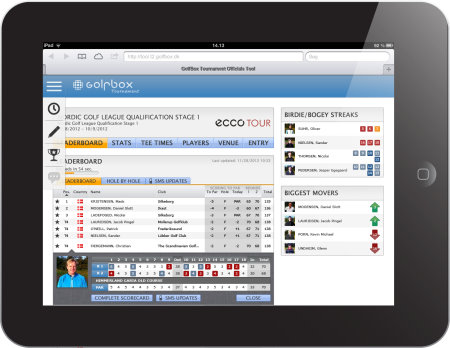 The successful Danish software company GolfBox A/S have signed a new 3-year agreement with the Nordic Golf League, which is a cooperation of professional golf tours from Denmark, Finland, Norway and Sweden. This 3rd level tour is one of the breeding grounds for the upcoming professional, and many talents which are now on the European Tour are a product of the Nordic Golf League.

GolfBox has not yet officially released this new software, but during the recent Q-School for the Ecco Tour(the Danish part of the Nordic Golf League), the new software was shown in public during this live pilot test. The feedback was extremely positive, not only from the organizers, but also from players and spectators.

“We are very pleased with this new agreement. This is a confirmation that the significant investment into the new tournament software has paid off. We started this project in August 2011 and now almost 10.000 production hours later we can’t wait to release it,” says Christian Faergemann, CEO of GolfBox.

Faergemann adds that the new tournament software has been designed completely to embrace the fact that tablets and mobile devices are a central part of the future software usage. It may also be groundbreaking in several areas with new modules to assist Tournament Directors, referees, TV crews and other official’s connected to high profile tournaments.

GolfBox are not rookies in supplying tournament software. They have many high profile clients and in 2012 close to 30.000 tournaments was handled using the current GolfBox tournament solution.

More than 900 golf clubs and several golf unions, such as The Danish Golf Union, Norwegian and Swedish Golf Federations, European Golf Association, Scottish Golf Union and Golf Union of Wales today use GolfBox or parts of the software.

GolfBox have previously been consecutively awarded as a “Gazelle” company by Danish financial magazine Børsen and nominated to “Entrepreneur Of The Year” in the “Start up” category by Ernst & Young. GolfBox was also given the award “Owner Leader 2010” by PWC. GolfBox anticipates their international growth to continue in the years to come.