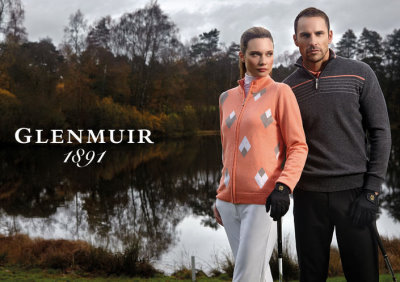 The venerable Scottish brand will outfit both Team USA and Team Rest of the World (ROTW) with official uniforms to include trousers, polo shirts and caps. All 24 icons, as well as team captains Fred Couples and Darren Clarke (Europe’s 2016 Ryder Cup Captain), will be treated to a tailored fitting upon arrival in Dubai on Tuesday, 21st April.

Since its beginnings in 1891, Glenmuir has been committed to creating golf wear with impeccable care, skill and dedication. It is driven to instill each expertly-crafted piece with the essence of golf: traditional, but forward-thinking; perfectly balanced; elegant and, of course, Scottish to the core.

“With its deep roots in golf and long-standing association with Team Europe as the preferred Ryder Cup clothing supplier, we couldn’t think of a better partner for our inaugural event,” says Dan Hudson, Commercial Director of ICONS Cup creator Worldwide Sports & Entertainment. “The age-old golf axiom ‘look good to play good’ will undoubtedly hold true on the fairways and greens of the Earth Course.”

“To this day, Glenmuir remains a family-run business dedicated to producing the finest golf wear,” says Mikhel Ruia, Managing Director of Glenmuir. “ICONS Cup competitors will find themselves in good company with Glenmuir having supplied the European Ryder Cup Team shirts and knitwear for 30 years. The part played by teamwear in bonding players together should not be underestimated and this partnership further reinforces Glenmuir’s commitment to crafting the finest golf wear for players at all levels of the game, from local club players to Ryder Cup stars, and the elite sporting legends taking part in the 2015 ICONS Cup.”

The ICONS Cup is a significant departure from a standard celebrity golf tournament. It exclusively features low-handicap, A-list athletes playing morning foursomes on Day One followed by 12 singles matches. The ICONS Cup concludes the following day with 12 additional singles matches.