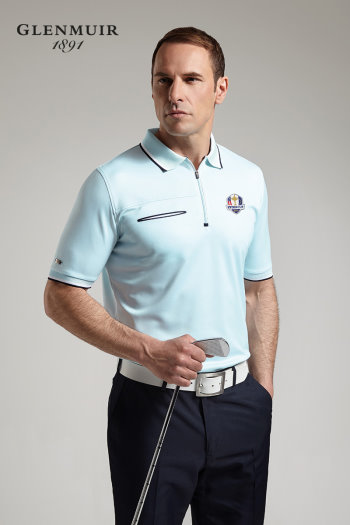 Following the success of the 2014 Ryder Cup matches at Gleneagles under Paul McGinley, the renowned Scottish golf clothing brand, Glenmuir, has been selected as Official Ryder Cup Licensee for the 2016 and 2018 matches. Glenmuir have supplied the shirts and knitwear for European Ryder Cup Teams since 1987 and right up to and including the successful 2014 team at Gleneagles, Scotland. The brand which has been at the heart of the game of golf since 1891 will design, market and sell Official Ryder Cup merchandise over the 2016 and 2018 Ryder Cup matches.

Glenmuir’s Managing Director, Mikhel Ruia said: “Glenmuir is one of the last remaining truly Scottish golf clothing brands with our rich 125 year golfing heritage. To be selected as Official Licensee, having been involved in the Ryder Cup merchandise programme since 1987, marks this partnership as one of the longest standing in the world of professional sport. We see ourselves as the team behind the team, which really motivates our 95-strong workforce here in Lanark, Scotland.”

European Tour & Ryder Cup Marketing Communications Director, Tim Hunt said: “Over the years, Glenmuir has become a hugely valuable and trusted partner and we look forward to continuing to build on that relationship during the 2016 and 2018 Ryder Cup matches.”

On the future of the brand whose 125th Anniversary will take place in the same year as the 2016 Ryder Cup matches, Mikhel Ruia, added: “Having been part of this truly global sporting spectacle since 1987 is a great honour and privilege for Glenmuir. Our appointment as Official Licensee further reinforces Glenmuir’s commitment to crafting the finest golf apparel”.

Any PGA Professional and stockist can associate themselves with this unique event and capitalise on its impact through the Official Ryder Cup Prestige Collection. Please contact local sales agents or contact customerservice@glenmuir.co.uk, +44 (0)1555 662241. This collection will also be made available at www.glenmuir.com

Glenmuir, born and based in Scotland since 1891, remains a family-run business dedicated to crafting the finest golfwear. Glenmuir have designed and supplied shirts and knitwear for The European Ryder Cup Team from 1987 right up to and including the victorious 2014 team at Gleneagles, Scotland. The brand have also enjoyed partnerships with The PGA, VisitScotland and EventScotland. Glenmuir are proud to say that the brand’s clothing has been worn by champions at Augusta, winners of the Claret Jug and on the world’s leading courses.