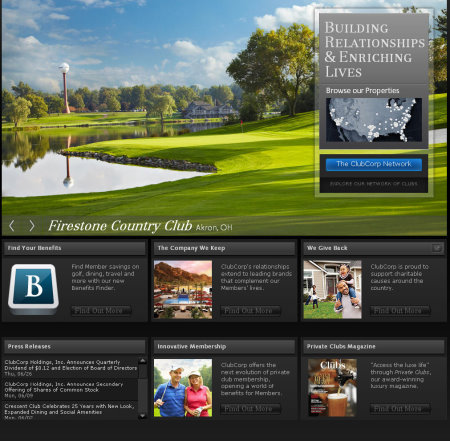 ClubCorp, The World Leader in Private Clubs® (NYSE: MYCC) has announced that its Board of Directors has declared a quarterly cash dividend of $0.12 per share payable on July 15, 2014 to all common stockholders of record at the close of business on July 7, 2014.

In addition, at its annual shareholder meeting held June 25, 2014, ClubCorp announced the election of Martin Newburger, Steven Siegel and Bryan Traficanti as Class I directors for a term of three years. By advisory votes, shareholders also approved the compensation of the Company’s named executive officers and voted to hold this “Say on Pay” vote annually. Shareholders also voted in favor of ClubCorp’s appointment of Deloitte & Touche as the company’s independent registered public accounting firm for 2014.

Eric Affeldt, president and chief executive officer: “We are pleased with the election of Marty, Steve and Bryan to our board of directors. We are grateful for their contributions as we continue to grow the company and maximize shareholder value.  Our dividend is the result of strong first quarter operating results and the board’s confidence in both allocating capital to reinvention and acquisition opportunities while still returning cash to shareholders.”

Since its founding in 1957, Dallas-based ClubCorp has become a leading owner-operator of private golf and country clubs, business, sports, and alumni clubs in North America. ClubCorp owns or operates a portfolio of approximately 160 golf and country clubs, business clubs, sports clubs, and alumni clubs in 25 states, the District of Columbia and two foreign countries that serve over 370,000 members, with approximately 15,000 peak-season employees.