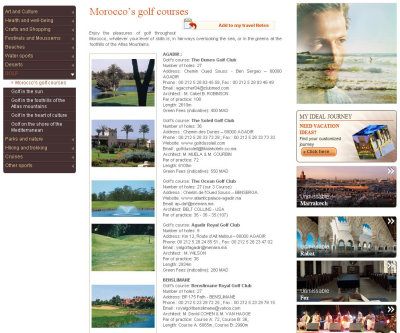 The Morocco Golf 100 Series kicked off this week and the new tournament is offering UK club golfers of all abilities the chance to win a spectacular golfing trip to Morocco.

The series of nationwide events, organised by the Moroccan National Tourist Office (MNTO), celebrates the anniversary of golf’s arrival in the kingdom in 1914, when Morocco’s first course, the Cotton and Pennink-designed Royal Golf Tangier, was opened.

A century on, male and female golfers at a number of clubs across the country will have the opportunity to compete in a designated Morocco Golf 100 Series competition at their local club.

The top two finishers at each event will then be invited to a prestigious UK final in October 2014, where the winners will receive the chance to experience golf in Morocco first-hand.

The opening event took place this weekend at the picturesque Croham Hurst Golf Club, South Croydon, with further events to follow at locations around the UK, including courses in the south-east, south-west, Midlands and north-west.

The winners will be announced shortly.

The MNTO’s director for UK and Ireland, Amine Boughaleb, said: “We are thrilled to be celebrating the first centenary of golf in Morocco, and equally excited about the forthcoming Morocco 100 series.

“With this exciting competition, we’re extending an invitation to golfers from around the world to see how far golf in Morocco has come in our first hundred years. From Royal Golf Marrakech, a course set within sight of the Atlas Mountains, to the beautiful Dar es Salam Golf Course, home to the European Tour’s prestigious Hassan II Golf Trophy, there is so much golf to be played in Morocco, and all at very competitive prices.

“And we’re easily accessible from the UK, with flights from most major airports. With this tournament, we hope we can showcase to the British golfing public just what an unspoiled golfing paradise we have here in the kingdom.”

There are 29 courses in Morocco, with a further 11 due for completion by 2020. Morocco, a country which enjoys 300 days of sunshine per year, is also famous for its outstanding natural beauty, from the Atlas Mountains to perfect beaches.