The cream of South Devon’s golf courses have combined to create one of England’s most glorious and scenically-stunning golf trails thanks to the photogenic south Devon coastline that is characterized by charming coves and estuaries and elevated cliff tops that offer panoramic seascapes.

This mouth-watering collection of Thurlestone, Teignmouth, East Devon and Bovey Castle have all been designed by some of golf’s most revered course architects around the time of the ‘Golden Age’ of golf course design and will be known as the South Devon Golf Tour www.southdevongolftour.co.uk

Located in an Area of Outstanding Beauty, Thurlestone is a magical mix of links turf and cliff-top terrain and much of its location atop a promontory give it its breath-taking panoramas over the legendary Thurlestone Rock to the east and the picturesque Avon Estuary and Burgh Island in the West. Often compared to Pebble Peach, this Harry Colt design is by no means as severe thanks to its wide open fairways unless of course the coastal winds start to blow. 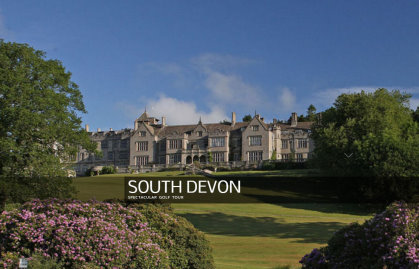 Teignmouth, created by the famed Alister MacKenzie, also owes a great deal to its magnificent situation. Laid out on the high moor of Little Haldon over 800 feet above sea level, the outward nine looks over the town of Teignmouth and the estuary of the River Teign whilst the contrasting back nine looks east over the Exe estuary towards Portland Bill, a well-known headland on the Jurassic Coast in Dorset. The course today remains remarkably similar to MacKenzie’s original 1924 design and retains his signature sloping greens, many of which are surrounded by humps on three sides and feature two tiers like many of those found at Augusta.

East Devon Golf Club, perched on the cliff top 400 foot above Budleigh Salterton, commands stunning panoramas over the western end of the Jurassic Coast and the surrounding Area of Outstanding Natural Beauty. This 6,231-yard seaside heathland course with wide tracts of gorse and heather dividing each fairway was designed by the great Herbert Fowler, with later input from both Harry Colt and James Braid. Its defining characteristics include well-drained fairways, close-cropped turf and firm, undulating greens that make it a fair and enchanting golf course, though testing when the sea breezes comes in off the sea.

Finally the inland retreat of Bovey Castle provides an interesting contrast to the coastal tracks thanks to its setting in amongst the mature woodlands of Dartmoor National Park. Designed by JF Abercromby to rival its sister courses at Gleneagles and Turnberry, Bovey Castles opened to great acclaim in 1930. The challenging, yet beautiful course meanders through the estate whilst the luxurious accommodation and five star facilities of the castle mean the resort is regarded as one of England’s most idyllic destinations to play golf.

“You could not find a more spectacular group of golf courses so conveniently located together in one of England’s most popular and jaw-droppingly, glorious coastal locations,” comments Andrew Cooke, CEO & founder of Golf Tourism England.

“These courses are indeed the cream of the crop in south Devon and together they make an alluring offering when combined with the many natural attractions in the area such as the Jurassic Coast, now a UNESCO World Heritage site, Dartmoor National Park, its sandy beaches and numerous walking and cycle trails.”

The development of the South Devon Golf Tour will be helped by the fact that the group has a dedicated golf tour operator working alongside them. Graham Ruth of Exclusive Golf Breaks will provide golf packages to the area as well as marketing the tour to his clients and to golfers around the world via the website, www.southdevongolftour.co.uk.

South Devon can be easily accessed by car via the M5 whilst visitors from northern England, Scotland, Ireland and Europe (including France, Holland, Spain, Portugal and Italy) can reach the county by air via direct flights into the international airport at Exeter.

The South Devon Golf Tour is another example of Golf Tourism England driving golf clubs and resorts to club together and to market themselves as a group to the multi-billion pound golf tourism industry.

The Alps Tour is celebrating its 20th anniversary this year with the unveiling of a new new logo and a new tagline – ‘Raising Golf Stars‘.

Mizuno has announced the re-signing of PGA Tour player Keith Mitchell to a three-year equipment contract.