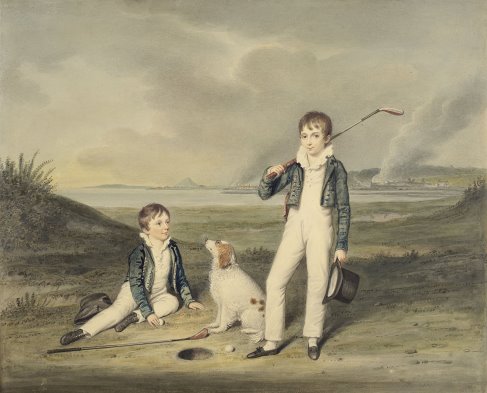 An early 19th century watercolour showing two boys playing golf on the Old Links of Musselburgh, where the game has been played continuously for 550 years, is for sale at Bonhams 19th and 20th Century Pictures and Prints sale inEdinburghon 8 December. It is estimated at between £20,000-30,000.

The Old Links of Musselburgh six miles east ofEdinburgh, is the oldest operational golf course on earth and is one of three contenders for the original ground on which the game of golf began to be played in Scotland, probably in the mid-14th century.

The painting, by William Douglas was executed in 1809 and depicts features of the course still seen today. In the middle distance is the great sand bunker, still known as Pandemonium. Also visible is the public house now known as Mrs Forman’s, where golfers paused to slake their thirst.

Behind the boys are the Prestonpans potteries, thevillageofAberlady, the promontory of Kilspindie and Gullane Hill, while in the background the distinctive conical shape of Berwick Law is clearly seen.

The boys are believed to be sons of Captain Andrew Wauchope of Niddrie. One of Captain Wauchope’s other sons, Robert, later a Vice-Admiral of the Royal Navy, was also depicted by William Douglas as a golfer, wearing almost identical clothes to those worn in this picture.

This rare watercolour appears historically accurate and is a gold mine for golf enthusiasts. The golf clubs – ancestors of the modern driver – both have leather grips and exhibit wooden shafts, probably of flexible ash or hazel. These are attached by whipping to a hardwood club head, probably beech or holly.

The golf ball depicted is a ‘feathery’ which was produced by a time-consuming process requiring considerable expertise and involving, in its final stages, the pressing of a top hat full of feathers through a small hole in a softened leather ball. Each craftsman could only produce three or four featheries per day, with the result that each cost as much as 4 shillings. The feathery was not a durable ball and the boys might carry 4-6 for their round. They could, however, be hit for up to 250 yards.

The golf hole depicted seems substantially larger than the present-day standard. However, this may not be artistic license as standardisation of hole size had not arrived by 1809 and, when it came, it was from the links depicted in this drawing. In 1829, the Musselburgh Golf Club invented a hole-cutter which was 41/4 inches in diameter. This found favour with the game’s governing body, the Royal & Ancient Golf Club of St Andrews, and was adopted as a worldwide standard in 1891.

Golf has long been encouraged among the young in Scotland, the optimal time to take it up being the age of the boys depicted here. At Gullane, a few miles along the coast from Musselburgh, there is a short children’s course. On its 1st Tee, a stern notice warns: “Adults may only play on this golf course – if accompanied by a Child.”