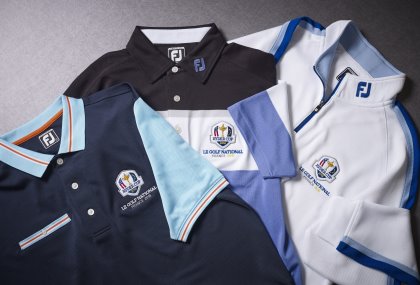 FootJoy, the #1 Shoe and Glove in Golf, has extended its Official Licensee role with Ryder Cup Europe for a further three years following the success of its Ryder-Cup branded gloves, socks and apparel launched around the 2014 contest at Gleneagles.

The new deal will see the successful partnership continuing for the events at Hazeltine National Golf Club in Chaska, Minnesota in 2016 and Le Golf National near Paris in 2018, with the respective Ryder Cup logos featuring on new FootJoy gloves, socks and apparel.

Incorporating a number of stylish polo shirts, sweaters and pullovers, the apparel line-up for next year’s Ryder Cup in the U.S. will include new ‘Evoke’ and ‘Maui’ colourways, whilst golfers will also have the chance to buy European-coloured shoes thanks to the Mark of a Player brand’s revolutionary MyJoys service.

“We’re delighted to extend a really special partnership with Ryder Cup Europe and are privileged to continue our involvement in what is the most anticipated tournament in golf,” said Paul O’Hagan, Marketing Executive for FootJoy. “Our Gleneagles-branded garments have proved really popular over the last two years and we hope the new agreement will help support our retail partners further with more standout garments until at least 2018.”

The new Ryder Cup-branded FootJoy garments are now available to stockists and consumers throughout Europe. They form part of an exclusive Ryder Cup Collection, including products from other premium brands, and can be seen on the official online shop: http://euroshop.rydercup.com.

Richard Hills, Europe’s Ryder Cup Director, said: “Ryder Cup Europe is delighted to extend our agreement with FootJoy, the number one shoe in golf. As one of our valued Official Licensees, the company proved a huge success at Gleneagles last year and I have no doubt they will continue to build on that success when The Ryder Cup takes place at Hazeltine National next year.”

PING has announced details of its Autumn/Winter 2022 apparel range, which boasts a range of ground-breaking material technologies, including the first to use of graphene in a golf apparel collection.