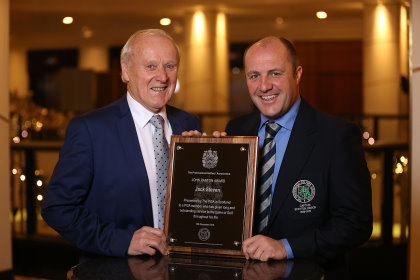 Jack Steven bought his first set of golf clubs from John Panton, learned life lessons from the great man and has now picked up a prestigious prize named after one of Scottish golf’s legendary figures.

“This completes a remarkable cycle for me which stretches over many years,” said Steven as he received the John Panton Award for “outstanding service to golf” at the PGA in Scotland luncheon in Glasgow.

His PGA career started in 1962 as an assistant to Alex Fox at Dalmahoy, but it was at Glasgow Golf Club that Steven served as head professional for 37 years before retiring in 2007.

“To say I was completely overwhelmed when I received the letter informing me of this honour is putting it mildly,” he said after joining Finlay Morrison, Jimmy Taylor, Ian Marchbank, Frank Rennie, Willie Skinner and David Huish as recipients of the award.

“Most people, especially the overworked members of the PGA, dream of something good happening to them. Well, it has happened here for me with this award as accepting it is a great privilege.”

Admitting he felt humbled, Steven added: “I wouldn’t be standing here if it wasn’t for John Panton. He was my boyhood hero and my inspiration and my mentor.

“From the committed club professional, an ambassador for Scottish golf and a true gentleman, I learned etiquette, responsibility and behaviour at a very young age.

“I bought my first set of clubs from John. I met him when I was a junior member at Tulliallan when he visited the club with his renowned film show.

“At the end of this, I had the nerve to ask him for a golf lesson. Off I went to Glenbervie, duly got my lesson and he gave me that friendly smile and said ‘I think you’d better come back for other lessons.’

“Later, after learning I was playing in the Scottish Championship, he invited me to play 18 holes with him at Glenbervie and that was something special. I informed him that I was considering turning pro. He had no vacancies at Glenbervie, but he organised for me to go to Dalmahoy as an assistant to Alex Fox.

“My future had been decided by this quiet, modest man who had the respect of us all. He is also the only golfer I know who has a drink (ginger beer with a dash of lime cordial) named after him.”

Paul McGinley was the guest of honour at the event in Glasgow, regaling the audience, which included Paul Lawrie, with tales from his winning Ryder Cup captaincy at Gleneagles in 2014. Former Liverpool, Aston Villa and Derby County striker Dean Saunders was the guest speaker.