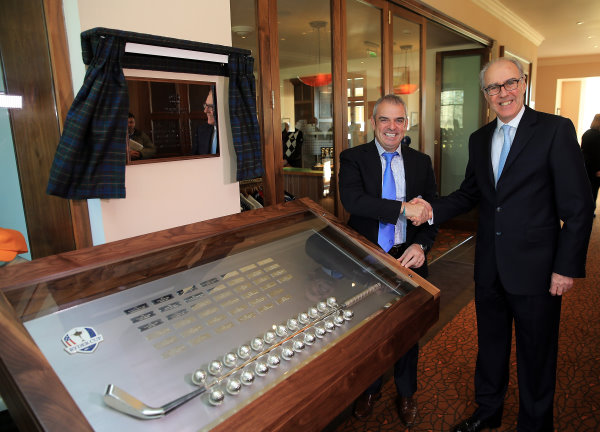 Paul McGinley today (Wednesday) paid his first official visit to The Gleneagles Hotel since being elected as European Ryder Cup Captain last month, and marked the occasion by unveiling a ceremonial Silver Putter which symbolises the proud history of the biennial contest.

The sterling silver club, which is a replica of a late 18th century putter and is adorned in a case by 24 golf balls representing the number of players in The Ryder Cup, will be on display in the Dormy Clubhouse at the Perthshire venue from now until the conclusion of The 40th Ryder Cup, which will be played on the PGA Centenary Course from September 26-28, 2014.

The putter was first presented by the then European captain Sir Nick Faldo at Valhalla in 2008 and has been exchanged as a gesture of goodwill and sportsmanship between Europe and the United States at each subsequent Ryder Cup.

Today its journey was completed when it was presented by McGinley to Patrick Elsmie, Managing Director of The Gleneagles Hotel, where it will be on show for the next 18 months leading up to The 2014 Ryder Cup, when Scotland hosts the contest for only the second time following Muirfield – the venue for this year’s Open Championship – which played host in 1973.

McGinley said: “It was a huge honour to be given the responsibility of being European Captain for The Ryder Cup at Gleneagles and I’m delighted to be here officially for the first time.”

The 46 year old Irishman added: “The Ryder Cup has a proud past, as of course does golf in Scotland, and the unveiling of the putter here today is a significant symbol of how The Ryder Cup has contributed richly to the history of the game and how next year’s contest will continue this tradition.

“It is also a reminder of the goodwill that embodies the very spirit and ethos of The Ryder Cup, which will be prevalent once again when we welcome Tom Watson and his American team to Scotland next September.”

Patrick Elsmie said: “The Silver Putter symbolises the Ryder Cup ‘baton’ being handed over to Gleneagles and Scotland, so it’s a great honour to have the European Captain here to unveil it, in its new home in the Dormy Clubhouse. We’re delighted to welcome Paul to Gleneagles, and very much look forward to working closely with him over the next 18 months to stage an unforgettable Ryder Cup.”

EuropeanRyderCup DirectorRichardHills, who accompanied McGinley on his visit to Gleneagles, said: “It only seems like yesterday that we were at Medinah but we are already very much looking forward to The 2014 Ryder Cup here, in the Home of Golf, where Paul will lead us all in helping Scotland welcome the world.

“Our captain is one of the game’s great scholars and knows all about the importance of The Ryder Cup in the history of the game, so it was a proud moment for him to unveil the ceremonial Silver Putter here today.”

McGinley, of course, has already played a noteworthy part in Ryder Cup folklore, having holed the winning putt on his debut at The Belfry in 2002.

The Irishman was also part of the victorious European teams at Oakland Hills in 2004 and at The K Club 2006 before becoming a Vice Captain to Colin Montgomerie in Wales three years ago and then Olazábal at Medinah last September.