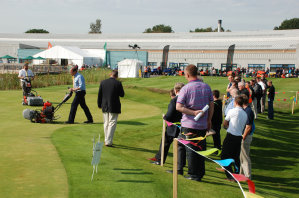 Over 400 guests, including many current customers, prospects, dealers and distributors, representatives from the media and local dignitaries, attended the event which provided a varied programme of activities. Industry partners including BIGGA, STRI, IOG and GEO were present as were suppliers to the sector, Scotts, Syngenta, Bernhard and Broadwood International.

The event took place in a relaxed atmosphere, somewhat similar to a country fair, with equipment displays and demonstrations, historic Ransomes equipment including the first Budding lawnmower, a working Ransomes steam engine, thrasher and ploughs, factory tours, outdoor games and a nearest the pin competition on the company’s three-hole golf course.

On the following weekend a Family and Friends Day with a

similar format saw 620 people invade the premises to see the array of turf maintenance equipment produced in Ipswich. A model steam railway provided rides for the children and entertainment included fete and funfair-type games, a ‘beat the goalie competition’, music from a local school band, a putting competition and a BBQ lunch. The local police and fire and rescue services were also in attendance with their latest vehicles.

Commenting on a very hectic three days, managing director David Withers said, “It was quite a week and exceeded all expectations. We had around 430 visitors over the two industry days and 258 of those toured the manufacturing plant. Some came from as far away as Holland and Austria. Many remarked that they had not appreciated that we produced mowing equipment on this scale, so it was pleasing to get the message across to so many.

“The Family and Friends Day was equally successful and provided the opportunity for the staff to show their loved ones where they worked and showcase how they contribute to the success of the business here in Ipswich. The parade of Ipswich manufactured product went down particularly well, with members from the production lines driving the vehicles around the arena to the cheers of their family, friends and colleagues.

“The team here, led by the Marketing department, did a fantastic job of putting on a superb event, which has certainly contributed to raising the profile of our business, locally, across the UK and internationally. It was a resounding success!”