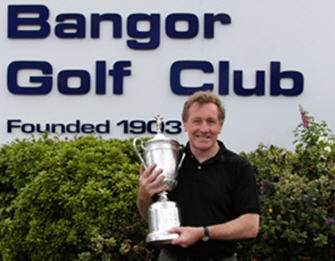 For most of his working life Michael Bannon is the archetypal golf-club PGA professional, providing the whole range of traditional services – from selling merchandise to coaching on the practice ground and more – at Bangor GC, County Down, Northern Ireland.

His working life does not end there, however.

Michael has spent a much smaller part of his schedule coaching Rory McIlroy as he’s become the US Open Champion…the most exciting young player on planet earth… and the world ranked no.3 at the age of 22.

From being simply one integral cog in the international network of such PGA pros, Bannon has been catapulted into the world spotlight by McIlroy’s phenomenal performance at The Congressional reflecting his repertoire of skills and sublime grasp of the intricacies of the golf swing.

Demonstrably, McIlroy’s game represents much more than natural talent, more even that untold hours honing those talents on the range. Wise counsel and structured, individual coaching has been the adhesive that has pieced the simple yet complex jig-saw together.

So, in order to enable the PGAs of Europe member countries and their professionals to benefit from a searching insight to currently the hottest swing in the sport, the PGAs of Europe’s Director of Education, Tony Bennett, himself a Master PGA professional who holds a M. Phil in Sports Coaching qualification, talked at length to Michael Bannon about how it has all come about.

The outcome is fascinating question-and-answer discussion about McIlroy and the development of a golf swing that every player in the world, professional, amateur, junior, senior and of both genders could envy. Bannon, for instance, has a rare insider’s view not only of all that is right about the swing that charmed the golfing world, but also the tiny moves that they are still working on. The interview will be re-produced on the website of the PGAs of Europe in a four-part series entitled “McIlroy: His Coach & his Methods”.

Read the exclusive and unique four-part series HERE. Parts 1 & 2 are already published on the site with further extracts continuing over the next week in the run up to The Open Championship.