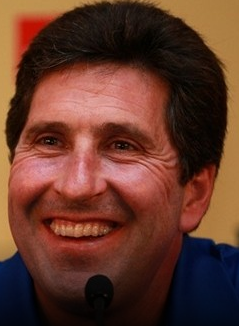 José Maria Olazábal has accepted an invitation from the Tournament Committee of The European Tour, ratified by The European Ryder Cup Players and Stakeholders Board, to captain the European team in The 2012 Ryder Cup at Medinah Country Club, Medinah, Illinois, United States of America, from September 28-30, 2012.

Olazábal, who was born in Fuenterrabia, Spain, on February 5, 1966, becomes the 23rd golfer to captain a Ryder Cup team against the United States and the second Spaniard following Seve Ballesteros, the winning captain in 1997 when Europe triumphed 14 ½ – 13 ½ at Club de Golf Valderrama, Sotogrande, Spain.

Olazábal made the first of seven Ryder Cup appearances in 1987 when Europe created history by winning on American soil for the first time and he was also on the winning European team in 1997 and 2006 in a Ryder Cup playing career that spanned 19 years. Olazábal and Ballesteros formed the most successful partnership in Ryder Cup history in the fourballs and foursomes with 11 wins and two halved matches from 15 played, and with 18 wins and 20½ points, Olazábal stands fifth in the European lists for most matches won and most points won respectively.

Following Europe’s 14 ½ – 13 ½ win at The Celtic Manor Resort, City of Newport, Wales, Olazábal succeeds Colin Montgomerie as captain with the aim of retaining The Ryder Cup which Europe has won eight times and the United States seven times with one match tied since players from the Continent of Europe became eligible in 1979.

Olazábal said: “The two Masters wins at Augusta National are the highlight of my playing career but this is my proudest moment. Golf has been my life and representing Europe in The Ryder Cup has given me so much enjoyment. So to be named the European Ryder Cup captain is something very special and I am looking forward to the next 20 months before we reach Medinah.

“Without question The Ryder Cup has given me many memorable times especially with Seve from the moment we were first partners in 1987 and Europe won in America for the first time. We were unbeaten in 1989 and 1991 and we won our last match together in 1993.

“Seve was also our Captain at Valderrama in 1997 and that was especially significant because the match was played in Spain and on the Continent for the first time and, of course, we won. In all I’ve played under five Captains – Tony Jacklin, Bernard Gallacher, Mark James, Ian Woosnam and Seve – and the last in 2006 with Woosie was one to remember because we won 18 ½ – 9½. I played two fourball matches with Sergio (Garcia) and we won both and then I beat Phil Mickelson in the singles which was the last match I played.

“It was also a wonderful experience to be involved as a vice captain with Nick Faldo in 2008 and then again with Colin Montgomerie when we regained the Cup at Celtic Manor last year. I’ve learned a lot along the way and linked to my own experiences I look forward to drawing on all that knowledge with the aim, of course, to keeping the Cup in our possession. We all know The Ryder Cup is one of the most exciting and important competitions in the golfing calendar, and that it always inspires team members and spectators alike, but there is nothing like holding that trophy at the end of the week.

“I have spent a lot of my career in America and the fans there have always been fair to me. We want to keep the Cup, and that will be our priority, but I know that the American team will share with us the desire for this match to continue the fabulous tradition of The Ryder Cup with fair play and good sportsmanship the vital ingredients.

“I have accepted the captaincy but I think my desire to keep playing is known by everyone. This is the first of four tournaments in succession I am playing on the Desert Swing of The European Tour International Schedule. I am looking forward to competing again and giving myself the chance to win.

“But I want to stress it is a great honour to become the European Ryder Cup captain and I will be committed to getting everything right in the build-up to the 2012 match.”

Olazábal, who won the Masters Tournament in 1994 and again in 1999 after recovering from rheumatoid polyarthritis in three joints of his right foot and two in his left, struck his first shots at the age of two at the Real Golf de San Sebastian, set in the lush foothills of the Pyrenees. He was drawn to the golf course because it was where his father, Gaspar, worked as the greenkeeper and his mother, Julia, as wardrobe mistress. It was on the practice range at Real Golf de San Sebastian in 1979 that Olazábal also met Sergio Gomez, who would go on to become his long-time friend and manager.

Aged seven, Olazábal won the Spanish Championship for under nines. Soon afterwards, Ballesteros broke through on The European Tour and Olazábal, although committed to studying at the public school in Fuenterrabia, knew that he wanted to aspire to such heights especially when three years later Ballesteros returned to his own home further along the Spanish coast with the famous silver claret jug following his 1979 Open Championship triumph.

Olazábal turned professional in 1985 when he led from start to finish to win The European Tour Qualifying School at La Manga in his native Spain and he made an immediate impact by becoming The Sir Henry Cotton Rookie of the Year in 1986 when he finished runner-up to Ballesteros in the then Order of Merit. He set new records with two wins on the way to earning three times what any other first-time Tour professional had earned with a stroke average of 70.69.

Olazábal has won 23 times on The European Tour International Schedule with 30 wins in all worldwide and he became the second Spaniard to be inducted into the WorldGolf Hall of Fame when he joined his great friend Seve Ballesteros (inducted in 1999) in that illustrious group during a moving ceremony at St Augustine, Florida, in November, 2009.

Medinah Country Club’s Number 3 Championship Course, close to Chicago, has hosted three Major Championships – the US Open in 1949, 1975 and in  1990 when Olazábal finished tied eighth and the US PGA Championship in 1999 and 2006. It has also staged a US Senior Open. The course was designed by Scotsman Tom Bendelow and carved out of an oak tree forest in rolling terrain and opened in 1928. After the 1999 US PGA Championship Rees Jones, the renowned architect, undertook a modification project and the course played to more than 7,500 yards from the championship tees in the 2006 US PGA Championship.