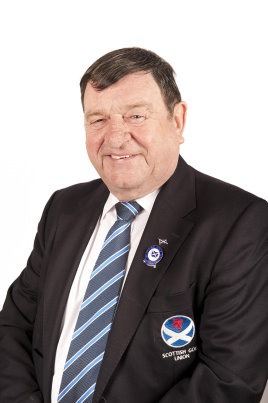 Murray becomes the North East’s first representative to hold the honour since Dennis Miller was in post between1987-88 and takes over the mantle from Bathgate’s Bert Leslie. The 75-year-old has been the area’s representative on the SGU council since 1995 and has been an active volunteer in local, area and national golf for nearly 40 years.

“I am very proud to receive the honour of becoming the Scottish Golf Union’s 49th President, following in the footsteps of many men who have contributed so much to the development of amateur golf in Scotland,” said Murray.

“The role of the SGU has changed significantly during the time I have been involved and during these challenging times we are doing as much as we can to support our clubs in many different areas as well as grow the game through the recruitment of more young players.” added the new President, who has played a key role in junior golf in the North East over the years.

“On the course, it will be an exciting year ahead for Scottish Golf with the Walker Cup matches at Royal Aberdeen in September. That’s something I’m really look forward to and hopefully we’ll see a few Scots – and North East players – in the Great Britain & Ireland team.” concluded Murray, an R&A qualified referee for the last 14 years.

Murray’s Vice-President will be Maurice Shields, from Windyhill in Dumbartonshire, with Ian Harvey, representing Kilmarnock (Barassie) in Ayrshire, becoming the new Junior Vice-President.

SGU Chief Executive Hamish Grey said: “We welcome Gordon’s appointment as our new President in recognition of his volunteering work at both national and area level. He has been a key member of our championship committee for a number of years and has become a very well known figure on the national events scene who will be a worthy ambassador for the SGU in 2011.”