Faldo Series final tees off with visit from McIlroy 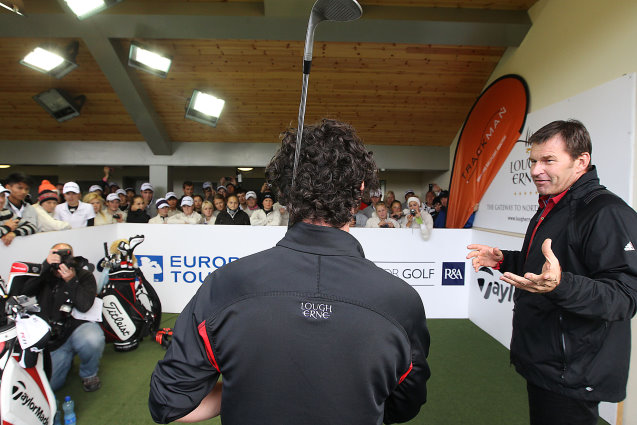 Rory McIlroy joined Sir Nick Faldo at Lough Erne Resort in Northern Ireland to give a clinic to competitors on day one of the fifteenth Faldo Series Grand Final. Earlier Jordan Smith of England and Ireland’s Victoria Bradshaw both posted two-over-par 74s to share the first round lead.

McIlroy is a three-time winner of Faldo’s global golf development programme. The reigning US Open Champion won Faldo Series Under-15 and Under-17 titles in 2004 and 2006 respectively.  The 22-year-old was also a winner at the 2006 Faldo Series International Trophy inHong Kong.

“It was tough out there but fun,” said 18-year-old Jordan Smith from Bowood after his round of 74 in strong winds. “I played solid and enjoyed having to hit some unique shots.”

“I’m chuffed with the way I battled mentally,” said Victoria Bradshaw, 21, fromBangorwho shares a coach with McIlroy. “I managed my way round the course really well and the local knowledge in these conditions helped.”

More than 30 local school children were also in attendance on day one for a grass-roots clinic with Faldo, part of the six-time Major Champion’s drive to create access to the game for a younger audience.

A field of 77 players are competing in this year’s Faldo Series Grand Final at Lough Erne. 16 different countries are being represented by some of the world’s top young golfers, boys and girls, aged 13 to 21.

Winners of 17 Faldo Series Europe events in 11 different countries across Europe and South America, plus three qualifiers from Asia, are inCounty Fermanagh,Northern Irelandfor the World Amateur Golf Ranking event which concludes on 14 September.

Competitors are playing over three rounds on the Faldo Course for the Faldo Series title and a start in a professional Tour event. Trophies will be awarded to winners of five age-categories, three for boys and two for girls, all of whom will be exempt for the Asia Grand Final in China in March 2012.

For more information on the Faldo Series visit www.nickfaldo.com