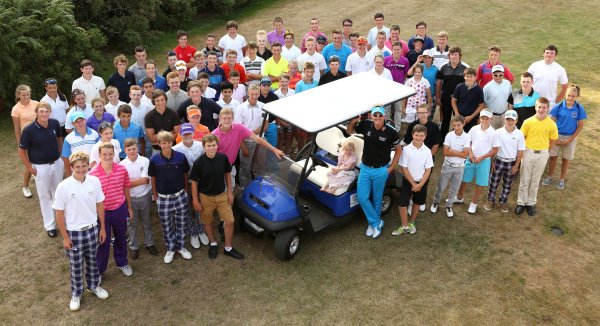 Ian Poulter was reunited with a four-wheel friend from Medinah when Club Car supplied a Ryder Cup golf car for the star’s annual junior golf day at Woburn in July.

The Ian Poulter Invitational, run in association with IJP Design, welcomed 96 junior golfers from across the UK, giving them the opportunity to meet and share time with the Ryder Cup hero.

Club Car was happy to add a little Ryder Cup magic to the day by supplying one of the official vehicles used at Medinah in September last year, during Team Europe’s memorable victory.

And, just for once, Ian Poulter was able to take it easy and ride around on the car, watching the up-and-coming youngsters take on Woburn’s magnificent Marquess Course.

Ian Poulter said: “The Ian Poulter Invitational is all about bringing together talented junior golfers from across the UK and giving them the opportunity to experience competition on a championship course that has hosted top level European Tour events. We had a great day – lots of fun and some outstanding golf – and I’m grateful to Club Car for its support and adding a touch of Ryder Cup magic to the day.”

Kevin Hart, Club Car’s Sales Director Golf for the EMEIA regions, said: “This is the second Ian Poulter Invitational we have supported with a Ryder Cup car.

“This vehicle, in particular, embodies many great memories from Medinah Country Club and Europe’s remarkable win, which will hopefully inspire some of these talented juniors. Who knows, may be one of these boys or girls will go on to play in The Ryder Cup or Solheim Cup.

“Ian’s commitment to developing junior golf should be applauded. He puts a lot into this day and you can see how much it means to the young people to spend time with him. Hopefully, seeing Ian driving around in an official Ryder Cup Club Car added an extra element of fun and excitement to the day.”

Club Car has a rich history with The Ryder Cup. The company, the world’s largest manufacturer of small-wheel, zero emissions electric vehicles, has been associated with the event since 1999. It will once again supply vehicles for both Captains, Vice-Captains, all team and match officials, as well as all on-course television and event logistics for The Ryder Cup 2014 at Gleneagles.