What could drones mean for golf? 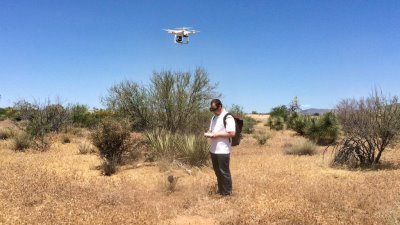 Whether you know them as drones, UAVs (unmanned air vehicles) or UFOs, there is no escaping the impact that they will have on our lives, from delivering our parcels or pizzas, to safely scanning for landmines or providing information for the emergency response to disasters.

In terms of golf,  you’ve probably already seen drone footage if you watched the US Open at Chambers Bay – Fox Sports used them to show tee to green flyovers and live action from above. And you may well have seen an online video of a drone delivering a cigar to a player in the middle of their round.

From speaking with colleagues, clients and fellow players, I’ve realised that there is a lot of apprehension about the possible uses and benefits drones could have in our industry. In the interests of full disclosure: I run an animation company specialising in creating flyovers for golf courses. You might think that by highlighting how we could be making more of this exciting new technology, I’m talking myself out of business. But if you read on, I will explain why we are drone advocates.

So, besides cigars, what else can drones offer the golf industry?

I’ve always been a big believer in showing the golf course. That is, showing members, visitors and anyone who stumbles on your website what it looks like in some detail.  With a drone you can show the course from almost any angle. You can take a photo from up to 400ft (the FAA restriction), showing the layout of the course, or you can capture a flyover video for each hole.

You can now buy a drone for around £1,000, which, if you are a golf club wanting a flyover of your course, is a lot cheaper than hiring a helicopter or creating an animation. If you don’t want to do it yourself, then there are plenty of companies who provide this service for less than £1,000.

There’s been a lot of talk about the safety of flying drones in built up areas, which is understandable. Flying one above a large open space like a golf course poses less risk, arguably less than being hit by a golf ball. And if necessary it can be flown when the course is free of players.

The possibilities for using drone footage are endless, from course guides to spectacular photos from previously impossible angles. Players can use the hole guides to understand how to play each hole and the footage can be made available on mobile devices so it can be viewed before playing each hole (or in the interest of fast play, on the walk to the next tee).

We shouldn’t restrict ourselves to thinking drones can only be used to capture footage the golf course either. You can show other facilities such as the clubhouse, tennis courts and accommodation.

A drone isn’t just useful for making your golf course look good, you can also use one to make sure it stays that way. It can fly at low level over the whole of a golf course in less than an hour. This is easily done before the first tee time, so won’t bother the members. A superintendent can use this footage to spot early signs of low moisture conditions or pest infections. Drones with more sophisticated cameras can show incredible levels of details, allowing you to identify clusters or individual divots, and even sprinkler heads.

The drone can be programmed to make the same flight path, so over time the course can be analysed, informing water and chemical usage and quite possibly saving money. 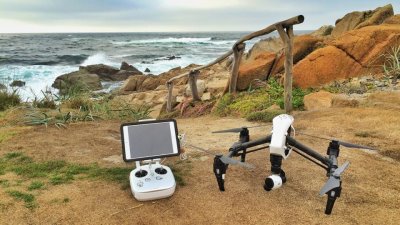 If I was a golf course architect I would be very excited about drones. I know a few who have already embraced the technology, using them for site surveys and photography and quickly gaining a better understanding of the site.  Some drones can even give you a point cloud or photogrammetry survey of the site, which you can use as a geo-referenced base for the proposed routing and grading.

We had the chance to work with Jackson Kahn Design on a project in Arizona recently, and they had invested in their own drone. With the aerial photos and video panoramas they supplied, we felt spoilt for information. It really helped us to understand the topography of the site, as there are some things you just don’t spot when you’re on the ground.

For a golf course that is under construction drones also let you film regular flyovers.  Progress can be reviewed by the committee and consultants who couldn’t be on site. And why not post it on the blog for the members to see how things are getting on; I’m sure they’ll appreciate being kept up to date.

Today’s course guides are great for showing distances, but a drone can include elevation data, giving the player a lot more information, and less excuses! It can also take high resolution photos to create incredibly detailed maps, to the extent that you can see leaves on the ground.

We recently worked with a company called AirDog who have created a drone for the extreme sports industry that automatically follows and films surfers and base jumpers. The same technology could be used to follow your golf ball. In theory, it could film your round of golf, so that you could later analyse or replay your best shots. And using GPS data it would automatically record the distances of each shot. This could be a great add-on for clubs to offer their members.

It might not be wise to let members bring their own drones on the course, but for a club tournament you could have one drone, controlled by someone with experience, who can record footage of the play, or follow the final pair on their way round the course. This could even be broadcast back to the clubhouse, adding a whole new level of excitement to local club tournaments.

If you are a course photographer or, like me, work for a golf course animation company, then you might think it’s time to start worrying that drone footage will soon replace our work. I happen to have a different view:  I think drones can only improve the work we do.

As an animation company, we rarely work on existing golf courses. Most of our work is on new builds or redesigns. Quite simply, you can’t use a drone to film what isn’t there, and most of our work is on projects that don’t exist yet.  So for us, the use of drones will mean we can create even more detailed animations, because we can get our hands on even more information, such as site photography and more detailed topography. This means that our work can play an even more useful role in the design development process.

Drones will never replace the golf course photographer either.  They might both use cameras, but they do it in very different ways. A drone has the obvious advantage of being able to take photos and film from the air, but it will never be able to compete with a photographer’s sense of composition, understanding of light, and how to capture the essence of a course in that perfect split second.

For those of us who work in the visual side of the golf industry we should see this technology as complementary to what we do, and if it can help to improve our work then we’re all for it.

Drones offer opportunities to work and play even smarter, with many more possibilities than I have touched on here. I’m sure there are some people who are concerned about having lots of unidentified flying objects overhead while they are playing a round.  I don’t think this will happen, simply because most golf clubs won’t allow it to. I think everyone can only benefit if they follow the lead of others in the industry, like the golf course architects, who are already embracing new technology and realising just how useful it can be.

Andrew Harris is director of Harris Kalinka and a member of Golf Consultants Association and can be reached at andrew@harriskalinka.com