With the current interest in the creation of reversible golf courses, Past President of the European Institute of Golf Course Architects David Williams has taken the concept even further in the building of a totally flexible golf course for a private client on the mainland of Europe. 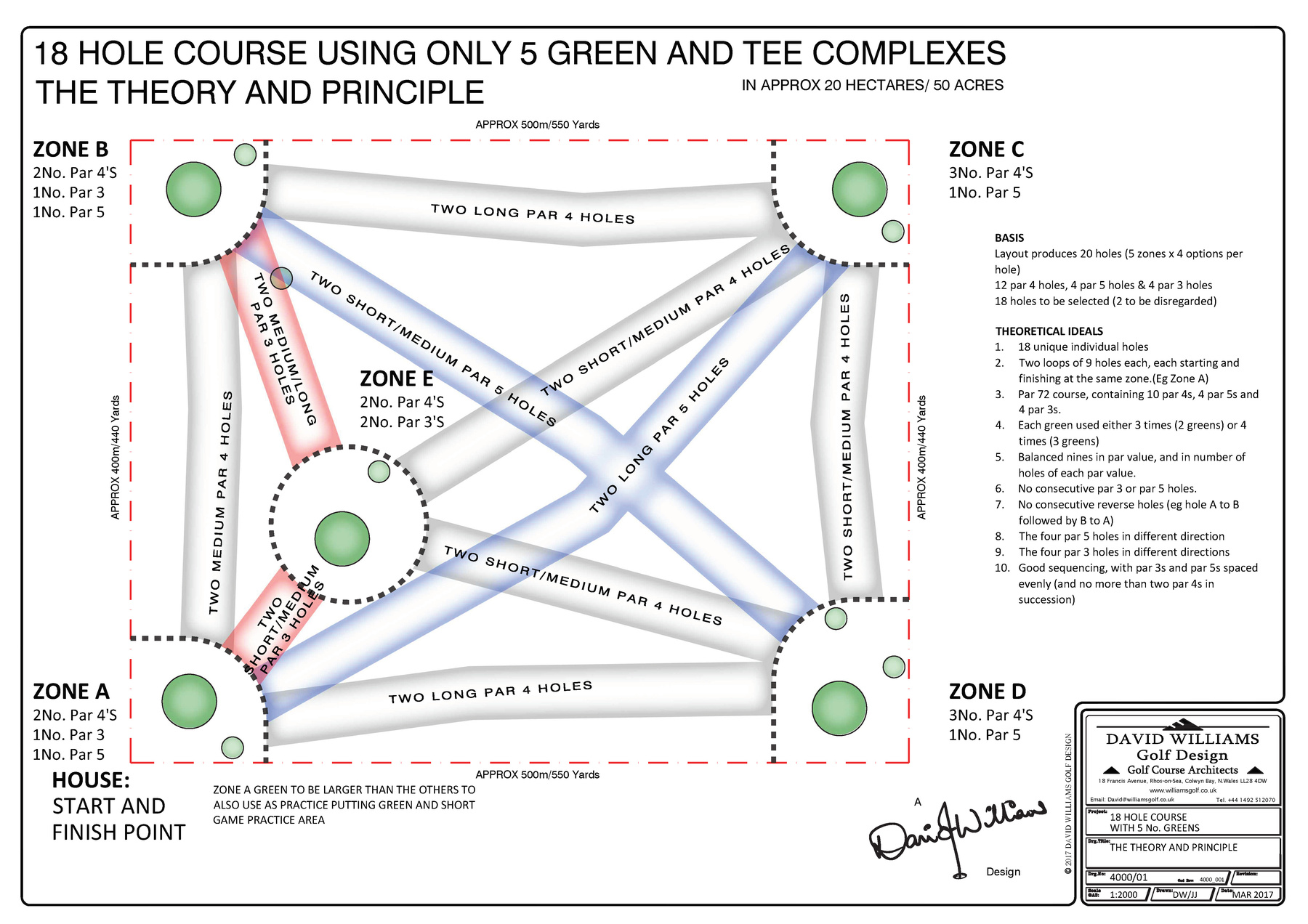 As David explains, “I developed the concept when a client wished a golf facility purely for his own private use on a site of approx. 50 acres/20 hectares around his house on his private estate.  His requirements were for a facility which replicated as closely as possible a full 18 hole round of golf, for the use of himself, family and friends, but without having to build – or ultimately maintain – 18 individual holes, greens and tees.

It was then that the concept was born, of a course consisting of five zones, each with a full size green and tee. The tee in each zone has four possible “destinations” in each of the other four zones, which, with five zones, gives 20 possible holes, as shown in drawing 01 (above)

In the theoretical model, four of the zones are placed in each of the corners of a rectangle, with the fifth zone towards the middle of the area, to create the par three options.  The lengths of the holes – and the overall size of the site – can be varied to suit the client’s brief and available area. Having explained the principle, my client was enthused by the idea and as he, his friends and family are all very low handicap players, the design developed into a course of virtually championship length – albeit with only five green complexes.

As well as the course playing as an 18 hole layout, I also wanted it to reflect as much as possible the experience of playing on a full length course, so set the Theoretical Ideals which are listed in dwg.01 (top). These include having 18 unique holes, two relatively equal and balanced loops of nine starting and finishing at the (club)house, no consecutive par 3s or 5s, and no consecutive reverse holes (ie A→B followed by B→A). I also added the usual requirements of different directions of the par 3s and 5s, and good sequencing.

Having established routings which met that theoretical ideal, the development into the Scheme Design was taxing – but interesting!  Course features were often used in two or three different holes, so bunkers and other hazards became multi-directional.  But it was the five greens that were the most challenging, with two being used 3 times, and the other three 4 times, and always from differing directions, albeit generally from within a 90° segment.

This allowed for challenging green designs, with for example, a deep but narrow green to receive a long iron approach on a medium to long par 4, whereas the same putting surface, played from a 90° different angle, also serves as the green for a short par 4 hole, where its (now) wide but shallow (from front to back) shape was ideal to receive a high iron or wedge approach.  Similarly, the greenside bunkering was designed to be played – and visible – from different areas of the fairway. The 9th/18th green complex in front of the house was also designed to act as a large practice putting green, with a multitude of differing pin positions, as well as being the focus of the short game practice area.”

Although the theoretical course works with one tee per zone, in practice, a number of small tees were built per hole, to give differing lengths and angles to individual holes.   The course was built during the summer of 2015, and opened for play in summer of 2016.  Such was its success that Williams has now been commissioned by a relative of the client to create a similar facility on his own land, with construction having commenced in March 2017.